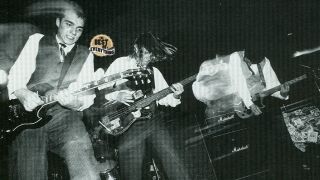 Emo has evolved steadily over the years and is one of the more difficult genres to define – so much so that a website called isthisbandemo.com was created to put some modern day fallacies to rest. Fall Out Boy are not, the website insists, an emo band. Right? Right.

That said, there are some brilliant, quintessential albums that not only typify what the genre is about but which also helped shape it. Of course, there are some great ones that didn’t quite make the cut – sorry Moss Icon and American Football – but rest assured, our little emo hearts broke at having to leave them out.

These decisions were not made lightly, and each record below not only helps define the genre, but also transcends it. Right now, we’re looking from the period beginning with Rites Of Spring’s 1985 debut to the turn of the millenium, which saw the release of Cursive’s landmark release.

Here, then, are the 11 essential releases…

While Rites Of Spring vocalist/guitarist Guy Picciotto has distanced himself from the ever-nebulous term, the band’s debut (and only) full-length record is widely regarded as giving birth to emo. Mixing abrasive punk rock with emotionally raw and wounded lyrics (“It feels like I’m falling through a hole in my heart” Picciotto spits on Hain’s Point), the Washington, DC band added a previously unheard dose of vulnerability and personal fragility to the hardcore template. Produced by Ian MacKaye, who’d laid Minor Threat to rest a couple of years earlier, Rites Of Spring turned aggression and introspection into perfect bedfellows, paving the way for the shape of punk to come.

Fronted by Ian MacKaye, Embrace’s one album was released after they broke up, in 1987, by which point MacKaye had already formed Fugazi. Though the band were only together from summer 1985 until spring 1986, Embrace had a lasting imprint on emo. Its 16 songs offered up a slightly more melodic take on the DC sound, while MacKaye, with his distinctively belligerent vocal delivery, poured his heart out, albeit with self-conscious defiance. “I failed you / As a person who should have cared,” he implores on Past, a song about a friend’s suicide. “I shut my mouth / Because I was scared.” Which is about as real as it gets.

With a title like Diary, you could probably guess that Sunny Day Real Estate’s debut album was full of heart-torn revelations. But these aren’t high school confessionals about lost love and break ups – rather they’re dark and desperate ruminations about the big issues – life, death, faith and the unbearable weight of being. Across eleven searing, swirling songs – featuring future Foo Fighters members Nate Mendel and William Goldsmith – Jeremy Enigk’s vocals weave themselves in and out of existential torment through a series of lyrical vagaries. Yet however abstract the imagery, the way in which his words are delivered ensure you don’t just know what he means, but you also feel it deep within your bones.

Denver’s Christie Front Drive only put out one proper album – their other full-length (also known as Anthology) was a collection of tracks from their first 12” and a bunch of 7”s – but it stands as a staple of the genre. Its songs swing between tentative fragility and melodic explosions of sound, intricate guitar parts – something that would later be expanded upon by American Football – underlying largely unhinged songs about largely unhinged times and states of mind. Deeply personal yet open to interpretation, these were songs about friendship and love that blurred the line between the two while highlighting the importance of both.

First things first – Weezer aren’t an emo band. Certainly not now and possibly not ever. Yet sophomore record Pinkerton is – very much and without dispute – and emo album. In fact, it’s one that many claim helped shape, define and inspire the late ’90s scene that would follow. And no wonder – its ten songs might have retained some of the geek-rock quirkiness of their eponymous first full-length, but they’re riddled with the emotional and psychological insecurities of mainman Rivers Cuomo. It all makes for a neurotic, heartbroken set of songs in which nothing goes right and everything goes wrong. But there’s a dark beauty in that wretchedness that the band had previously never attempted and would never be able to replicate again, making this a unique Weezer album and a staple of a scene they never were – or ever wanted to be – a part of.

While dedicated fans would probably cite The Promise Ring’s 1996 debut record as the one to get, this is really the quintessential record by the Milwaukee band. Building upon the sloppy but seminal groundwork by Tim and Mike Kinsella’s Cap’n Jazz, The Promise Ring channelled a rush of fraught, frayed emotions into their songs, which sprang to ragged life nowhere more than on this second full-length. Peppered with insecurity and doubt – just listen to the title track’s pained declarations of uncertainty – this record is riddled with imperfections and youthful naivety, which makes it all the more genuine and heartfelt.

This first album from Kansas City’s The Get Up Kids is usually overlooked for their more polished second effort, Something To Write Home About, but it shouldn’t be. Unapologetically roughshod and starry-eyed, these eleven songs were lo-fi and urgent missives full of nostalgia for days that haven’t even passed yet. Poignant and powerful in equal measure, this album took place at the threshold between innocence and experience, where childhood innocence and dreams are forever lost, unable to be reclaimed again, poppy but gritty bursts of tender noise about both clinging on to what you’ve got – even though you’ve already let go.

Heavily influenced by Sunny Day Real Estate, Texas four-piece Mineral released two albums in two years, but by the time this second effort came out, in August 1998, the band had already broken up. Still, this record’s slow-burning, near-beautiful songs built up and then burst, ten twisted and contorted expressions of angst that strived to break out of the rut they were in. At any given point, it feels like vocalist Chris Simpson is going to break apart at the seams, but there’s also a strange kind of strength to his warbled vocals and the agonising pain his voice seems unable to contain. The band recently reunited and kicked off their 20th anniversary earlier this year.

Jawbreaker’s seminal 1994 album, 24 Hour Revenge Therapy, married punk rock and poetry to create a hyper-personal tour de force of cathartic, late night romanticism. While more than worthy of a place on this list, this first album by Jets To Brazil – the band formed by chief songwriter Blake Schwarzenbach after Jawbreaker split up – is just as vital. Intensely lyrical and highly literary – there are characters loosely based on Jack Kerouac and Truman Capote, among others – it’s a record that wrestles with the darkest aspects of the human condition (Sea Anemone and Conrad are both about suicide) while also remembering to set aside a place for light and love.

Released in 1999, Jimmy Eat World’s third album came before the mainstream success of 2001’s Bleed American, and while there are hints here of the glossy pop sheen that would propel that record into public consciousness – hello, Lucky Denver Mint! – there’s an untamed, unashamed and un-self-conscious rawness and vulnerability to its songs that make it the Jimmy Eat World record. Which is precisely why they don’t just get away with lines that, in other hands, may well be cringeworthy (“How long would it take me to walk across the United States all alone?” asks Jim Adkins on Splinter. “The West coast has been traumatized. I think I’m the only one still alive.”), but they positively thrive off them. A record that perpetually rides the wave of near-despair, but is never self-indulgent. Rather, it manages to be joyful and defiant at the same time, and to this day remains a record whose power and influence far exceeds that of the emo genre.

Whether with Cursive, The Good Life or solo, Tim Kasher has always taken a warts and all approach to songwriting, imbuing his personal experiences, neuroses and crises into his narrative lyricism. A record about the relationship between two characters called Sweetie and Pretty Mattress, Domestica bridged the gap between emo and indie rock, its off-kilter rhythms and bursts of awkward noise building upon and reinventing the genre as much as the semi-conceptual nature of the narrative refreshed it. Brash and abrasive but equally self-deprecating, it added an extra dimension of intelligent thought to the tired old strains of love-gone-wrong songs that (so-called) emo was soon to become.