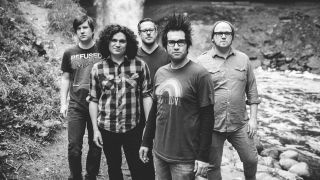 The release of Motion City Soundtrack’s 2003 debut album, ‘I Am The Movie’, didn’t so much open doors for the Minneapolis quintet, but booted them off their hinges.

The response to the Epitaph release was such that it landed a coveted support slot with Blink-182, who invited the band to open up for them on their European tour in the summer of 2004.

In fact, Blink bassist Mark Hoppus became such a fan that he signed up to oversee their next release, and that autumn he joined them in the studio for his first production effort. The resulting record, Commit This to Memory (2005) would go on to be hailed as a modern pop-punk classic.

Earlier this year, the quintet marked the album’s tenth anniversary with a tour across America, where they’d play the 2005 release in its entirety, before they made their way over to the UK, Europe and Australia. It’s been a year heavy on the nostalgia front, then. And, after the lukewarm response to their last studio effort Go (2012), you’d be forgiven for thinking their best work was behind them.

Until you hear their latest outing, that is. Released this month, the band’s sixth studio album Panic Stations (2015) has succeeded in recapturing the joy and energy of their first two records, whilst retaining the clean sounding, polished production of My Dinosaur Life (2010), which was the band’s first and indeed last album on a major label, and was once again produced their partner in pop-punk, Mark Hoppus. Its triumph is largely down to the way to the way it was written and recorded.

“We got started writing the album on tour back in 2013”, singer Justin Pierre explains. “We wrote a lot of ideas and got very excited about them. And we were looking back on the last record we had made, and we decided that we wanted to enthuse a bit more excitement into this one. That’s kind of a weird word to use, ‘excitement’, but I think that the songs on the last record were perhaps a bit sombre, and we just wanted to reintroduce an element of fun – not just into the sound but also into the process.”

“The last record we wrote in the studio as we were going along”, adds Pierre. “And we found that the translation of a lot of those songs into a live event was tough. So with this album we set out to write songs that we had already played a lot. We rehearsed and rehearsed and got to know each song inside out well before we went in the studio to record. And we recorded the songs all in the same room facing other, for the most part totally live. We’d never made a record like that before.”

It was producer John Agnello who suggested the band record live. His previous production credits include the self-titled Jawbox album and a couple of Dinosaur Jr. records (Farm and Beyond); Pierre had grown up listening to his work. For the vocalist and guitarist, it was an inspirational experience working with him and something of a dream come true. “He’s a work horse, but he’s also a play horse”, says Pierre. “I love the guy. He’s a super rad dude, and he was a lot of fun to work with.”

Recording took place at Seedy Underbelly North (previously called the Pachyderm Studios) where Nirvana made In Utero, and the setting and its history undoubtedly influenced the recording process, too. The final collection is 11 upbeat power-pop influenced rock tracks, played by a band that sound reinvigorated by the addition of a new member (drummer Claudio Rivera), and a renewed enjoyment for their craft.

“What we’ve done from the beginning is very catchy, fun, exciting music married with very depressing lyrics, but sung in a very excited away”, frontman Pierre says by way of explaining his band’s unique sound. “We sort of got away from that on the last record, which for the most part was very serious and sad. So for this one we wanted to get back to that mix of fun, rocking tunes with depressing lyrics, sung with a smile.”

This contradictory “happy-sad” mix of music and emotions is perfectly exemplified in the song I Can Feel You, which sees Pierre revel in the misery as he joyfully pronounces, “I’m starting to see / The problem with me / Is everything.” It makes for an entertaining dilemma.

Which begs the question as to what this album as a whole is all about. There’s no shortage of references to water and the ocean, and the title Panic Stations, one would assume, is referring to the nautical structures that act as warning posts at sea. What gives?

“Other than maybe with your first record, most of the time there’s a brief, intense window of time in which you’re writing songs for a new album, and so often it’s whatever thoughts and ideas you’ve collected in that moment. That’s the way it is for me, anyway. There’s usually some sort of accidental theme with each record, and with this one there’s a lot of water-based stuff going on. I don’t know where that came from initially, but it kept popping up in my words, and I just sort of ran towards the water in that sense. But I think a lot of those words can be used in different ways, which is what I like about this album.”

So he stumbled upon this loose thread of water-based imagery and swam with it. But what does it all mean, looking back through the songs now. Should we be worried about the singer and his state of mind?

“In my own journey through life, I’ve been trying to find some sort of answer or the one thing that’s going to fix everything”, he replies. “And we as human beings want that immediately. But what I’ve found, at least in my own life, is that you never get to it – whatever it is. So it’s just about being content with where you are, as long as you know that you’re heading in the right direction. So what I think about when I think about these songs, is that there’s still all of these thoughts going on in my head, but that I’m a lot better off than I used to be. And I’m heading in the right direction in life, even though I still have moments of complete and utter misery. I don’t want people to worry, but it’s sort of a relief to realise that there is no immediate cure or simple solution. It’s just about enjoying the ride and being kind to others, and hopefully keeping the demons at bay.”

That explains the accepting hopelessness that characterises tracks like It’s A Pleasure To Meet You, in which Pierre tells the subject of the song, “You are not alone / We’ve all had our battles with darkness and shadows / I’m here to let you know / It’s a pleasure to meet you.” But what of Motion City Soundtrack? Does the future look bright for the band?

“I think there was a moment of panic somewhere around 2012 or 2013”, admits the singer. “But then we pretty much immediately got excited about making music again. Not that we weren’t before. But we lost a drummer, and then we gained a drummer, and it was just a weird transitory time. It was momentarily unsettling, and then instantaneously the opposite of that once we were back on course. We started on this record a little over a year ago now, and it’s going to be very exciting to get out in front of people and start playing some of these songs.”

Panic Stations, it seems, is just a punchy title for a punchy pop-punk record. The boys are back. Call off the alarm.

Motion City Soundtrack are on tour in the US now. For more information, visit their official website.