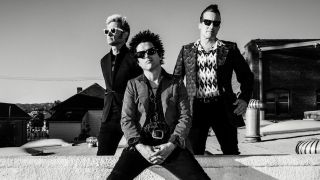 Green Day, Weezer and Fall Out Boy have announced that they’ll head out on the road together on the The Hella Mega Tour throughout 2020.

Green Day will kick things off when they play across Asia in March before hitting Russia and Europe in May.

Then in June, Green Day will team up with Weezer for two shows in Berlin and Milan, before all three bands meet up to play across Europe from mid-June, including dates in Glasgow, London, Huddersfield and Dublin.

July and August will see all three bands travel across North America, with further dates to be revealed in due course.

To mark the announcement, all three bands have release a single today: Green Day with Father Of All, Weezer with The End Of The Game and Fall Out Boy with Dear Future (Hands Up), which features a guest contribution with Wyclef Jean.

Green Day’s Billie Joe Armstrong has also revealed that the new track will be included on their upcoming studio album Father Of All Mothers****ers which is expected to be released in February – and he reports it’ll be the shortest album of their career.

He tells Zane Lowe on Apple Music’s Beats 1: “Well, we recorded an album and it’s called Father Of All Mothers****ers – its song title is also that.

“It's got a unicorn on the cover. It's rainbow, bright. It's got a horn and it's got funny eyes. Yeah, we made a new record and we're really excited. It's only 26 minutes long, so it's the shortest record we've made since Dookie or Insomniac.”

Armstrong reports the record will feature 10 tracks and says of the lead single: “Rock’n’roll sometimes has become so tame because people are... a lot of rock acts are always trying to look for the feel-good song of the year or something, everything gets really watered down and wimpy, and I think rock music should make you feel bad.”

As for the tone of the new Green Day album, Armstrong says: “There's a lot of depression, but with a sense of humour. But also just kind of the way the world works right now. I think we live in the time of complete and total chaos, or else we've always been, but now it's turned up to Trump.

“It’s just trying to reflect what's going on. It's not really writing political songs, but just writing about the shit that you see every day.

“American Idiot was the good old days. Remember when we just had two wars going on? Anyway, we live in the craziest of times right now.”

Weezer's track The End Of The Game will appear on their new album Van Weezer which is pencilled in for a spring 2020 release, while Fall Out Boy’s Dear Future (Hands Up) will be on their upcoming best of album.

Check out all the dates below.