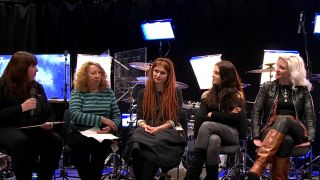 In this new excerpt the panel talk about how they feel about gendered musical roles, how they tackle questions about motherhood, and the term 'female-fronted'.

Cellar Darling won the award for Video Of The Year at the Progressive Music Awards last month.

Heather Findlay will tour the UK in January.

Jacqui McShee is on tour later this month.

Tickets for Radar Festival 2020 are on sale now.

Iamthemorning's new album The Bell is out now.