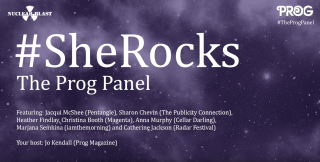 Earlier this month, some of progressive music's leading singers and other women who work with the genre gathered at London's You Tube Space for a discussion on the changing role women have to play in progressive music - long seen, if somewhat incorrectly these days, as a male-dominated genre.

Following on from this Cellar Darling played a short set highlighting tracks from their new album The Spell to an audience of Prog competition winners ahead of their current UK tour.

You can watch the first part of the #SheRocks Prog Panel below. We'll be bringing you more of this important panel over the coming weeks...