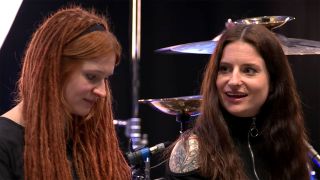 A few months ago some of progressive music's leading singers and other women who work within the genre gathered at London's You Tube Space for a discussion on the changing role women have to play in progressive music – long seen, if somewhat incorrectly these days, as a male-dominated genre.

In this excerpt the panel discusses whether acceptance as a female singer in prog gets better as we get older? Do younger acts provide more support? And how supportive are other women in the scene?

iamthemorning will release their new album The Bell through Kscope on August 2.

And Jacqui McShee's touring details can be found here.