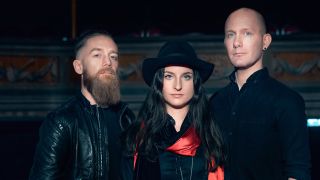 Swiss prog rockers Cellar Darling premiere the video for their brand new single, Death with Prog. You can watch the video below.

“With Death we are releasing another chapter of our upcoming concept album The Spell," say the band. "This time you can learn something about the other protagonist of the story — and again Costin Chioreanu has created amazing visuals in an animated video for the track. More will be revealed soon, with the fan-chosen single ‘Drown’, and we can’t wait to share the whole story with you.”

Directly after the 3pm premiere the band will undertake an online Q+A with fans. You can interact with the Q+A directly here.

"We will be hanging out in the comments section for one hour, where we’ll try to answer as many of your questions as possible," drummer Merlin Sutter told Prog. "A chance for you to find out more about the song, the video, and the album!”

The Swiss band consist of former Eluveitie members Anna Murphy, Merlin Sutter and Ivo Henzi. Death is taken from the band's second album, The Spell, a concept album which tells the story of a girl who falls in love with Death.

Pre-orders for The Spell are available now and you can get the album as 2 CD-digibook (featuring 13 songs + an audiobook of Anna Murphy telling the story behind the concept), black vinyl or digitally.

The band will head out on tour throughout the UK and Europe in March. They will play: