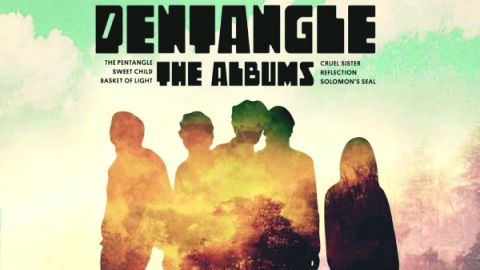 Even mentioning the names Terry Cox, Bert Jansch, John Renbourn, Danny Thompson and Jacqui McShee is enough to send people of a certain vintage into raptures. If they get their hands on this seven-CD collection of Pentangle’s first six albums (The Pentangle/Sweet Child/ Basket Of Light/Cruel Sister/ Reflection/Solomon’s Seal), the essential ones, with lavish extras and fabulous notes, joy will be unconfined.

The combination of Bert and John’s mercurial acoustic guitars, that flawless rhythm section and McShee’s heavenly vocals is one thing but the quality of the songs is the key. The shimmering Light Flight, the traditional murder ballad Bruton Town, the sheer British misery of The Snows are mere examples of where Pentangle took folk and jazz, making them a conduit between Anne Briggs and Led Zeppelin. Wildly experimental rather than deathlessly authentic they added brass, glockenspiel, sitar, dulcimer – whatever aided the cause. Although they existed in a constant state of tension, thanks to their other projects, when they were in harmony they were unrivalled.

The live versions of House Carpenter and She Moved Through The Fair still shred the listener and there are plenty of alternate versions and unreleased pieces like the early Market Song to justify a fan’s outlay. Box sets can often be an indulgence. This one is simply essential.