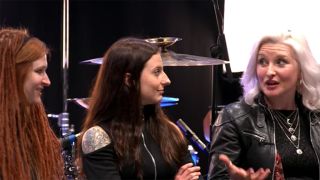 Last month some of progressive music's leading singers and other women who work with the genre gathered at London's You Tube Space for a discussion on the changing role women have to play in progressive music - long seen, if somewhat incorrectly these days, as a male-dominated genre.

In this excerpt they discuss whether women are under pressure to look marketable or present themselves in a certain way in today's music scene. Sadly, judging by some of the comments that have been left for some of these previous posts, a horribly mysogynistic attitude is still prevalent in certain quarters!

Heather Findlay's new album Wild White Horses is released on July 5. Heather is also involved in the Secret Sari Dress Campaign which aims to help stop human trafficking. You can learn more about it here.

iamthemorning will release their new album The Bell through Kscope on August 2. Singer Marjana Semkina has a Patreon page here.