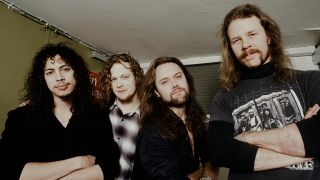 Metallica have taken us on a trip back in time in the latest episode of their Metallica Mondays concert series, with a set taken from their 1991 Wherever We May Roam tour.

The band have been uploading various classic performances from the vaults to keep fans entertained during the current lockdown.

So far, the thrash giants have revisited sets from Slane Castle in Ireland in 2019, Paris in 2017, Copenhagen in 2009, their 2017 homecoming show from San Francisco’s Outside Lands festival and "one of the best setlists ever" from Germany in 2015.

The latest broadcast is from Muskegon, Michigan, on November 1, 1991, when the band were on the road touring the Black Album, and it was introduced by Metallica drummer Lars Ulrich.

He said: "Today we’re going back a few years, back to the era of VHS tapes and analogue recordings, back to the Black Album tour, back to 1991.

"Muskegon, Michigan – find that on a map – the third show on the Black Album tour. We dug up old VHS tape for this week’s show – remember those things? – no HD crap or fancy sound mix. We’re bringing you straight old school vid from the house cameras and audio off the sound board."

"This was the third show on the Black Album tour... Muskegon, Michigan, 1991, a very special setlist. An Evening With Metallica, a 20 minute movie as a support act, a lot of long rocker hair at the time. I think that I played without a shirt on for pretty much that entire tour, but, um… no more."

Ulrich also made an announcement about an upcoming S&M2 album and DVD: "I’ve been told to tell you guys that – remember S&M2, from 9 months ago? – I just want to remind you all that S&M2 is definitely coming your way.

"I know there’s a lot of you guys that have asked and so here is what I can tell you: it has been completely remixed since it played in the movie theatres… since then, Greg Fidelman has remixed it and made it this much better, this much cooler, this much bigger, and fatter, and more whatever he does when he does all that.

"The video, the visual images have been embellished, it’s been reedited by the same team – Joe and his crew, who edited the Through The Never film about 6 or 7 years ago – so there’s a whole new visual thing happening, a whole new audio thing happening and it’s coming your way.

"As soon as we can get it to you, you know we’ll be there... S&M2 is definitely coming, thank you for your patience."

Each concert is broadcast on Metallica's YouTube and Facebook at 8pm ET (1am BST) with fans able to donate cash live to Metallica’s All Within My Hands foundation during the stream.