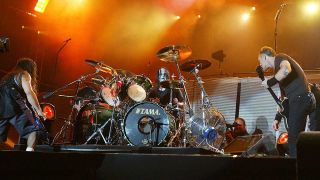 It’s mid-afternoon and we know something’s up. The biggest bit of gossip of Download 2004 is spreading like a bad stink from boozed-up publicists loitering in the over-stuffed VIP area to the hulking crowd of 100,000 metal fans beyond.

First the good news: Sunday headliners Metallica are here. Then the really, really bad news: they’re missing a drummer. “I heard Lars Ulrich jumped out of a helicopter as it was landing and disappeared into the crowd,” one allegedly in-the-know label executive tells me with all the severity of a news anchor between JD-and-Coke burps.

Other theories circulating the sardine-packed backstage bar range from death to, even worse, Lars’s departure from the band. Whatever the truth of the matter is, one thing is clear: if thrash metal’s men of the moment are going to play Download then they’re going to need a new man behind the kit. More importantly, if James Hetfield and company actually do have the gonads to show up with a new drummer in tow, it could be a cascading clusterfuck of a show.

All the more reason to stick around. The day grows long, and stories of some very incredible sounds emanating from Metallica’s dressing room are getting more credible. By 10 o’clock, over an hour late and following an epic bottle-throwing war that’d put Braveheart to shame, Metallica walk out with some local talent to back them up.

First up: original Slayer drummer Dave Lombardo, and – after a quick explanation by singer James Hetfield that Ulrich was in poor health and in hospital – Metallislayer launched into one of the most drum-tight renditions of Battery, from 1986’s Master Of Puppets, ever heard.

A timid For Whom The Bell Tolls, manned by Slipknot sticksman Joey Jordison, is next, followed by a more confident Creeping Death. By the time Seek & Destroy launches the Iowan drummer was adding his own hyperspeed fills.

A slightly loose Fade To Black backed by Ulrich drum tech Flemming Larsen is a swiftly-forgotten misstep, because Jordison quickly recaptures the stool to give fans one of the most memorable Metallica shows ever. It isn’t just a day of overpriced piss-weak beer talking: it’s an awesome display of solidarity between metal heroes.

But what had happened to Metallica’s absent founder? “We’d had a heavy touring schedule in Japan, Europe, America and Australia,” Ulrich would later say of the night. “In the midst of that there were things that had come unravelled in my personal life – my family and my marriage and stuff.

"I’d had a lot of late nights and early mornings. So I woke up in Copenhagen on the Sunday morning, had brunch with 14 in-laws and cousins and then I got on the plane.

"I was exhausted. It was pretty fucking scary to be in a little fucking metal tube at 41,000 feet. I’ve never had anxiety attacks, or any kind of stress attacks, ever.”

Anxiety attacks? Try playing in front of tens of thousands of screaming Metallica fans with merely a few hours’ notice.

“We were like: ‘Oh well, we just lost another drummer,’” joked Slayer frontman Tom Araya. “Dave has a tendency to play fast – period. But Metallica played faster – they sounded a lot more like what Metallica should sound like.”

Ouch. But forget any intra-Big Four of thrash cattiness, what was definitely true of that evening is that it was a chance for fans to see Metallica as they never have, and never will, sound again.

This feature was originally published in Classic Rock 109.