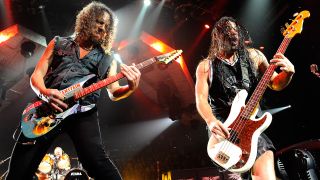 Metallica have unleashed the third video in their Metallica Mondays series.

The band have been uploading live shows from their archives, with the first episode showcasing their Slane Castle performance from last June, while the second showed the band in top form in Paris from 2017.

Now they’ve gone further back with their set from Forum København in Copenhagen, Denmark, from July 22, 2009 – part of Metallica’s tour in support of their 2008 album Death Magnetic.

It features fistfuls of classics including The Four Horsemen, Master Of Puppets, Damage, Inc. and Enter Sandman.

The whole set can be found below, where you’ll also find the full setlist.

Speaking about Metallica Mondays, the band said: “While we’re all doing our part and staying home, we find ourselves missing live music, so how about we dive back into a few of our favourite shows at a socially responsible distance?

“Let’s stay connected and virtually visit a few of our favourite places in the world together as we bring a series of live Metallica shows right to your couch!”

Each concert is broadcast on Metallica's YouTube and Facebook at 8pm ET (1am GMT) with fans able to donate cash live to Metallica’s All Within My Hands foundation.

Over the weekend, Metallica’s Now That We’re Dead was used as The Undertaker’s entrance theme for WrestleMania 36 in Orlando – with James Hetfield, Lars Ulrich, Kirk Hammett and Robert Trujillo later sharing the clip on social media.

Last week, Metallica announced they were donating $350,000 to four coronavirus relief funds through their All Within My Hands foundation.

The cash has been given to Feeding America, Direct Relief, Crew Nation and the USBG National Charity Foundation.