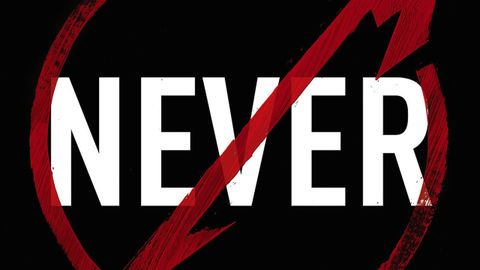 When Metallica talked about Alan Parker’s iconic but flawed Pink Floyd rock opera, The Wall, as an inspiration for their first concert movie to hit the silver screen, alarm bells should have started ringing immediately. Great metal band they undoubtedly are, but high-concept independent filmmakers? Not so much. Essentially what we have here is every single idea inside the band’s collective heads crammed into each frame of its 90-plus minutes.

While you have to admire their ambition and vision, what Through The Never needs more than anything is someone, anyone, to say ‘No’. No, you shouldn’t spend so much money on making a film in 3D that barely utilises the technology. No, you shouldn’t take ideas from your live tours that are nearly 20 years old and palm them off as something new. No, you shouldn’t write the screenplay to the narrative that runs throughout the film.

Unfortunately no one said any of those things, so what could have been a glorious cinematic celebration of the live Metallica experience has ended up being a confusing and bloated vanity project. And what a shame that is, because the film’s opening sequence, which starts with the build-up to the gig, from fans in the carpark outside the venue to the backstage preparation, and ends in the four horsemen walking onstage and decimating the crowd with old faithful Creeping Death playing is superb.

The stage set is the most grandiose Metallica have ever had, the band are fired up and the cinematography is breathtaking, swooping from band to audience, capturing all the glorious, fist-pumping mayhem of a Metallica show perfectly. It’s at this point that the film’s storyline begins in earnest, as roadie Trip (Dane DeHaan doing a passable Ryan Gosling impression) is sent on an errand to collect a package that Metallica need before all hell breaks loose around him.

Why? Who knows, we never do find out. In fact we don’t find out much as the half-baked and convoluted plot device plods along giving you more and more unanswered questions each time it frustratingly interrupts a thrash metal classic in full flow. How Trip gets caught up in such trouble is unclear, why the city is being attacked is never explained; is this a disaster movie, a horror or a fantasy? It’s all of them at one time or another, yet in reality it’s none. It’s just a clunky, bothersome mess.

Were there no plot then this could have been a stunning concert film. All of Metallica’s most iconic setpieces are brought out and updated spectacularly and no one could accuse the setlist of being anything other than stellar. Through The Never looks and sounds fantastic, even though the 3D element is painfully under-used, and anyone with even a passing interest in metal is going to love watching the band smash through Ride The Lightning or One in their local multiplex.

Just think how much more enjoyable Through The Never would be without all the flab. Nice try gents, but next time, please, just stick to the music.