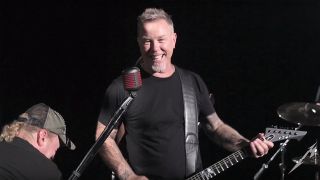 Metallica have released behind-the-scenes footage that details the making of their video for latest track Hardwired.

The promo was shot last month in a high school gymnasium with co-director and producer Colin Shane Hakes, who helped develop a one-take concept.

The band say: “Metallica descended on the space to shoot a real ‘smash-and-grab’ first video for the forthcoming album Hardwired…To Self-Destruct.

“This video was to be one take. One shot. No edits. No nip, no tuck. One continuous shot captured by the camera going counter-clockwise around the performing band, with the song’s chaos and energy being reflected by a strobe-like lighting effect, making it look like a series of disorienting fast edits – but, in truth, being nothing of the sort.”

Metallica’s 10th album is released on November 18. Frontman James Hetfield recently revealed the work only truly came together in the past two months, despite having been under production for several years. They’re planning to commence touring duties in January.