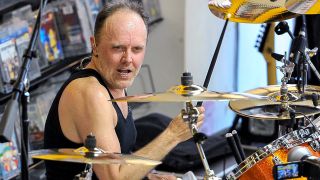 Metallica are “itching” to play tracks from upcoming album Hardwired… To Self Destruct on tour in 2017, says drummer Lars Ulrich.

And he adds that a “pretty extensive” road schedule will begin in January.

The band’s long-awaited 10th album, the follow-up to 2008’s Death Magnetic, will be released on November 18 via their Blackened Records label.

They debuted lead song Hardwired live in Minneapolis at the weekend, just five days after they’d played it together for the first time. They’ve just released a video of their performance of Battery from the same show. Watch it below.

Ulrich tells Rolling Stone: “We’re itching to play them. Right now, every day when we get into the tuning room we’re just playing the new songs. Then we’re like, ‘Wait, we gotta get out there and play Master Of Puppets!’

“Some of the stuff on Death Magnetic was pretty cerebral – you had to really think about what the next crazy part is that was coming up. Some of the songs from the new record are a little more physical. It’s going to be a lot of fun to play this.

“Also, some of these songs are a little shorter than the ones on Death Magnetic. It’s going to be a lot of fun to throw many of these songs in. But we’ll change the setlist every night, like we always do.”

He says the band are planning some “proper penetration of America” as part of their live schedule, marking the first time since 2009 that they’ll have carried out serious touring duties in the area.

“We did 180 shows on the Death Magnetic tour in two-week periods over three years,” he recalls. “That’s what works for us. We’re going to start pretty much full-on touring in January. There will definitely be some pretty extensive touring in January.”

Hardwired… To Self Destruct was under production for several years – although frontman James Hetfield has revealed it only took proper form in the past two months.

Ulrich says: “When we made the Black Album we did it six days a week for eight months. That’s not how we make records any more. It’s this very piecemeal process.”

That process included stopping work to deliver short runs of live appearances along with standalone performances. “It totally inspired us, reinvigorated and energised us,” he says. “We then brought that kind of rambunctious energy into the studio.”