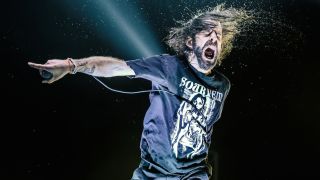 This, as you might imagine, is a motherfucking invitation, albeit to read a list of the 10 best Lamb Of God songs to date, rather than to some kind of terrifying and violent social occasion. So, you know, don’t panic. One of the most consistently lauded metal bands of the last 20 years, Lamb Of God have provided modern metalheads with shitloads of enduring anthems, but their album catalogue has plenty of hidden treats too. Choosing these has been a bloody nightmare, frankly.

Whether it’s the first Lamb Of God song you ever heard – it was, after all, the opening track on (sort of) debut New American Gospel – or just the song they nearly always finish their shows with, Black Label is a modern metal classic. Neatly encapsulating the Richmond quintet’s sound in four marauding minutes, it was a ferocious statement of intent that still kicks like a mule 16 years on.

Another obvious choice, perhaps, but can you imagine a Lamb Of God gig without this? Redneck rules because it manages to be both a celebratory sing-along and a thoroughly vicious, turbo-thrash neck-wrecker, custom built for the kind of pits that only the brave or the foolish would enter. You’ve bellowed “This is a motherfucking invitation!” in public at least once, haven’t you?

It’s easy to miss the subtleties in Lamb Of God’s music, not least because their general approach is to flatten all-comers with an assault of balls-out aggression. Grace begins with a brief, beautiful intro before erupting into one of those unstoppable grooves that are much harder to play well than they first appear. It’s still remorseless in its intensity, of course, but Grace is also a meticulously crafted heavy metal piece of intelligent songwriting, replete with a big heart and a glorious solo from Mark Morton.

The opening track on the album that established Lamb Of God as 21st century metal frontrunners, Ruin slays from its opening riff onwards. As much as people wanted the band to be “the new Pantera”, this has far more to do with the malevolent thrash of Slayer and Testament, albeit updated and executed with state-of-the-art precision. And then Chris Adler’s insane drum fill erupts and leads the band into flat-out polyrhythmic destruction mode. That’s your metallic money shot, right there.

In the heat of a live show, fans may tend to favour the more fast and furious moments in the LOG catalogue, but Omerta remains an occasional crowd-pleaser because it’s about as heavy as the band get, and utterly fucking livid with it. Delivering a Slayer-like sense of menace at a crushing mid-pace, it more than lives up to the tense promise of Randy Blythe’s ominous spoken intro.

Randy Blythe’s love of punk rock and hardcore has always been integral to Lamb Of God’s distinctive character, but never has it been more effectively channelled than on this short, sharp gem from the curiously underrated Resolution. From its shrieked ‘one, two, one, two, fuck you!’ intro onwards, Cheated is a jolting dose of pure spite and rage, Sex Pistol John Lydon’s famous onstage barb (“Do you ever get the feeling you’ve been cheated?”) twisted into the mother of all metalli-punk choruses. Lamb Of God should write more songs like this one, because the hardcore punk vibes suit them perfectly.

Clearly a band that like to kick off their albums with something unforgettable, Lamb Of God were a well-oiled and vociferous machine when they unleashed Laid To Rest. Driven along by a typically intricate but irresistible groove, it’s a masterclass in rhythmic power and snarling, swivel-eyed hooks, as Randy Blythe suggests that we might like to destroy ourselves and then “see who gives a fuck!”. It’s snotty, brutish and utterly exhilarating.

Deftones frontman Chino Moreno lent his vocal talents to this gem from 2015’s VII: Sturm Und Drang album, but that’s probably the least exciting thing about it. Metal isn’t always the best vehicle for songs with genuine emotional clout, but the grief that inspired Mark Morton’s poignant lyrics is palpable throughout Embers’ five harrowing but heartfelt minutes, not least due to Randy’s versatile, deeply engaged vocal.

Living up to their growing reputation as standard bearers for modern metal, Lamb Of God surpassed their previous achievements with ease on 2006’s astonishing Sacrament. Still their best album, it begins with one of the most powerful songs of the modern era: Walk With Me In Hell is blistering from start to finish, but also hugely atmospheric, which is not a trait we normally associate with mainstream metal. Somewhere between Mark Morton and Willie Adler’s inventive guitar work and the imperious thud of the rhythm section, Randy Blythe delivers a warped sermon from the malevolent mount, and goosebumps are mandatory.

‘Seize a darkened day/There’s only hell to pay…’ That’s how you start a heavy metal song and Blacken The Cursed Sun is simply one of the finest of the last 20 years. Never mind that the lyrics are acutely evocative of some unnamed personal torment, Lamb Of God’s greatest song to date is an object lesson in taking familiar elements and turning them into something powerfully distinctive and memorable. The chorus feels like a fresh heightening of tension each time it appears, but as the song’s central groove repeats and spirals towards the abyss, a mounting sense of ice-cold darkness envelops the sonic foreground and Randy Blythe starts sounding genuinely unhinged. It doesn’t get much better than that.