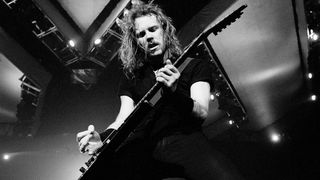 If one were to compile a list of hard rock and heavy metal’s greatest ever riffs, it’d be hard to look beyond Tony Iommi, Jimmy Page, Ritchie Blackmore, Brian May and Malcolm Young for the top slots, but in the past 35 years no band have been responsible for so many instantly memorable riffs than Metallica. As bassist Rob Trujillo astutely noted in 2013, “James Hetfield’s worst riff would be another band’s best riff.” Here, then, are 10 classic Metallica riffs you’ll hear in your head as soon as you read the song title…

10. That Was Just Your Life

For all the criticisms levelled at St. Anger, no-one could deny that it contained some hulking riffs. But from the opening bars of the Death Magnetic album, Metallica truly sounded like a band again. The men in black made us wait almost 90 seconds for the main riff to album opener That Was Just Your Life to appear, but it’s a cracker, a circular, snapping beast that seems to get more vicious with each repetition.

It may be an almighty tangle of shifting time signature, labyrinthine song structures and, famously, no bass at all, but …And Justice For All also boasts more killer riffs per square inch than any other multi-million selling metal album. Metallica’s last true thrash metal song boasts one of the best, a buzzing, insistent, fast and furious effort which perfectly sets up James Hetfield’s tale of a hellish, repressed adolescence.

8. Wherever I May Roam

When James Hetfield and Lars Ulrich decided that …And Justice For All had taken Metallica as far as they wanted to go in terms of prog-metal, they revisited early classics such as For Whom The Bell Tolls and Seek And Destroy for inspiration on reconnecting with groove and feel for the Black album. The powerful, driving riff to Wherever I May Roam perfectly encapsulates the stripped-back aesthetic they were aiming for, and producer Bob Rock wasn’t too wide of the mark when he likened the song to a “Kashmir for the ‘90s.”

Piss-taking friends of the band may have produced handkerchiefs and pretended to sob when Metallica debuted their first ballad in Bay Area clubs, but even the most hardcore old school fans can appreciate the brilliant descending riff which introduces the spellbinding second half of Ride The Lightning’s most emotional track.

The irony of thousands of whiny keyboard warriors perennially dismissing Enter Sandman as the “worst Metallica song ever!” is that the vast majority of them had never even heard the band until this blockbuster debuted on MTV in the summer of 1991. It was Kirk Hammett, not James Hetfield, who wrote the hooky central riff to what drummer Lars Ulrich acknowledges is essentially a one-riff song, but it Ulrich who identified the riff’s potential, rearranged it, and decided that it should be the very first thing the world heard on Metallica’s self-titled fifth album. Superstardom followed.

5. For Whom The Bell Tolls

From the moment that Cliff Burton joined the band, Metallica began to appreciate that ‘speed’ and ‘heaviness’ were not the same thing. For Whom The Bell Tolls may have been played at a fraction of the speed of Whiplash, but its atmospheric, dark drama bestowed genuine gravitas upon the San Franciscan quartet for the first time. On Ride The Lightning’s spacious, dynamic third track the chorus riff is simplicity itself, based around palm-muted E-string chugging and fat, ringing power chords, but it has a weight and power that helped birth the ‘90s Metallica sound.

Only James Hetfield, Lars Ulrich and Dave Mustaine truly know the full extent of the latter’s involvement in Metallica’s early songwriting, but the spine of Kill ’Em All highlight The Four Horsemen is indisputably Mustaine’s ‘baby’, albeit one birthed when Lars Ulrich suggested Metallica work upon a less frenetic version of Mustaine’s signature track Mechanix. That the song’s mid-section sounds suspiciously like Lynyrd Skynyrd is no coincidence, incidentally, as Mustaine admits that that, being “a jerk”, he reacted to Ulrich’s request to slow the tempo by playing the riff to Skynyrd’s Sweet Home Alabama instead.

On an album which is a true masterclass in dynamics, pacing and arrangement, the title track impacts like a fist to the jaw, with a fast descending, palm-muted low E string riff from James Hetfield that seems to suck the air from the room, before the listener is plunged headlong into the track’s irresistible, fast-moving current. As with all his rhythm parts on Ride The Lightning and Master of Puppets, Hetfield layered five or six takes of guitar to create this wall of sound, and producer Flemming Rasmussen recalls that each take from Hetfield was identical and flawless. Masterful.

When Metallica premiered Creeping Death at the Keystone club in Palo Alta, California on Halloween night 1983, there must have been a few bemused expressions in the crowd during the song’s mid-section, given that Kirk Hammett’s instantly memorable riff had already featured on Die By His Hand on his former band Exodus’ demo tape earlier in the year. There’s any number of brilliant riffs on Creeping Death, but Hammett penned this particular one – inserted by Hetfield and Ulrich without the guitarist’s knowledge initially - when he was just 16 years old: “I remember thinking ‘Wow, this is heavier than a lot of the bands that I listen to’,” Hammett later told Metal Hammer, “and thought I’d touched upon something.”

Jason Newsted’s tenure in Metallica wasn’t always happy, but one of the bassist’s fondest memories of his time in the group was when James Hetfield popped over to his apartment for dinner one evening in 1987 and Newsted played his new bandleader a few riffs he’d been working on. Upon hearing the riff that came to power Blackened, Hetfield exclaimed “Dude, that riff’s good enough to open our fucking album!” which is exactly what happened when …And Justice For All emerged the following year. Listening to that pulverising riff anew, it’s hard to escape the thought that Hetfield maybe should have trusted Newsted to contribute rather more ideas to Metallica in the decade that followed.