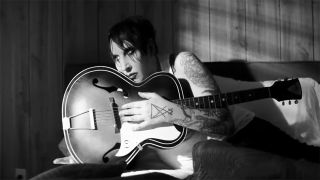 Marilyn Manson in a still from the new video

Marilyn Manson has released a video for his take on American folk song God’s Gonna Cut You Down.

The track has been covered in the past by a variety of artists, including Odetta Holmes, Elvis Presley and Johnny Cash, whose version appeared on the posthumous release American V: A Hundred Highways in 2006.

Manson’s cover first appeared on the soundtrack to the 2017 film 24 Hours To Live, which starred Ethan Hawke and Rutger Hauer, with Manson teaming up with director Tim Mattia for the new video.

Shot entirely in black and white, the promo cuts between film of Manson singing the track in a motel room and the shock rocker out in the desert digging a grave… but who for?

In September, it was revealed that Manson had landed a role in the third season of American Gods, which will will premiere on the Starz network in the US in 2020 and an internationally on Amazon Prime.

In July, Manson spoke about his upcoming studio album which will see him hook up once again with  Shooter Jennings, with whom Manson collaborated on a David Bowie cover in 2016.