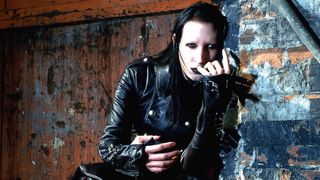 We know you know The Beautiful People, Rock Is Dead and The Fight Song. These are certified classics, branded onto industrial metal’s beating heart by one Mr Brian Warner – or Marilyn Manson, if you’re meeting him after teatime. But what about Manson’s lesser-known tracks; what about the ones that made a right old racket upon release but, as time went on, slowly faded into obscurity? We’ve got you covered – here’s 10 tracks for any MM novice, or even fans wanting to brush up a bit. And no, the demos don’t count.

It’s taken from Eat Me, Drink Me, so it’s automatically worth less than the paper you wipe your bum on that always seems to rip, right? Wrong. Evidence is Manson’s deepest stab at the arena rock ballad kinda thing he tackled on Eat Me, Drink Me; the muffled, restrained percussion hits extra hard in the chorus; Tim Sköld’s wiry guitar melody is the thinnest we’d heard on a Manson album for ages, dishing out a solo that doesn’t choke the song or take the focus from the emotionally overwrought lyrics. Eat Me, Drink Me isn’t shit and neither is Evidence.

Manson’s eighth record, Born Villain, was mostly bum. The record had a few saving graces and laid the foundations for its follow-up, 2015’s masterful The Pale Emperor. Blending the whispered, raspy vocals and bouncy bass of yore with seductive, almost post-rock trappings, Overneath The Path Of Misery is one of Born Villain’s said highlights. Shia LaBeouf directed a short film, also handily titled Born Villain, which features Overneath The Path Of Misery’s haunting, rancid build-up and loaded chorus. The video also features Manson stitching an eyeball into a vagina and, later on, he decides to shoot an old man in the face. Watch it if that’s… er, your thing.

Devour is a strong opening to another of Manson’s ‘meh’ records, 2009’s The High End Of Low. Once again, the bogeyman element is banished in favour of heart on sleeve business: ‘And I’ll love you if you let me’ should sound a bit sappy coming from the God Of Fuck, but he means it. It’s a triumphantly miserable chorus that the rest of the record fails to match, both on an emotional and musical level.

Opening Manson’s proper debut, Cake And Sodomy is one of Portrait Of An American Family’s brashest numbers alongside the singles. The scratchy, lo-fi production, primitive song structure and pseudo-political lyrical content is cartoony as they come, but Cake And Sodomy is a call to arms. A sing-along anthem that begs to be played live. An homage to baking and buggery.

Originally popping up on the Spawn soundtrack, Long Hard Road Out Of Hell is more than your standard Manson banger. It served as a weird body of water in which Manson tested some of his tricks, most notably adding then-Sneaker Pimps vocalist Kelli Ali’s squeaky clean vocals to a track that, in its chorus, boasted a similar aesthetic to Antichrist Superstar’s singles; the song, however, was all in all more subdued and heading down that long, hard road to Mechanical Animals and world domination.

The stars aligned, Twiggy Ramirez returned to the band and, er, Tarantino collaborator/Manson’s fellow Sons Of Anarchy star Walton Goggins managed to get stuck into The Pale Emperor. The bluesy, post-rock tinges of previous releases were dialled right up for Manson’s ninth full-length, with the influence of Killing Joke et al popping up and giving a friendly wave. Slave Only Dreams To Be King is the encapsulation of this, laying down a minimalistic amount of percussion to allow Manson’s gritty vocal to slap you like, you know, he actually means it. Goggins’ bookending passages read from James Allen’s As Man Thinketh essayare proper spine-tinglers, too.

A bass-led, haunting crooner that proved Manson could do more than just scream while wearing lingerie. ‘I’m dying, I hope you’re dying too’ is one of the finest couplets Manson’s ever spat onto tape, while the track never really kicks off. And that’s the beauty of it. It’s not about a quiet/loud dynamic. It’s not about a chorus that’s going to stay on the radio until radios are no more. Apple Of Sodom is an early example of Manson being able to evoke a precise atmosphere through nothing more than bare instrumentation and that inimitable voice of his. Another production job from Trent Reznor didn’t hurt, either.

It’s a John Lennon cover and it’s even better than the original, we promise. PHWOOOOOAAAAR.

Yeah, it sounds a bit like Ministry’s Burning Inside. Well, a lot like Ministry’s Burning Inside. But when our Brian’s screaming ‘Kill your God! Kill your TV!’ and Ginger Fish dishes out that tasty bit of double bass drumming before the solo, you can’t help but be wooed. So maybe this single isn’t exactly obscure; it was nominated for a Grammy in 2001 and came to fruition through Manson’s affiliation with Celebrity Death Match (he appeared several times, most famously when his plasticine counterpart killed Ricky Martin.) But, seeing as the only Manson LP it pops up on is live album The Last Tour On Earth, we feel that Astonishing Panorama Of The Endtimes should get a good seeing to from newer fans. Or re-seeing to from the older lot. Just get on it, yeah?

Unfairly ignored due to Holy Wood’s consistent perfection over its 80 or so minutes, GodEatGod sets the mood for one of the bleakest, most daringly scathing records of the millennium. For anyone who wasn’t a fan already, GodEatGod was their first impression of Manson. It was the first thing since the Columbine massacre and the madness that ensued: ‘Dear God, the sky is as blue as a gunshot wound. Dear God, if you were alive, you know we’d kill you.’ Arguably the sharpest thorn amid Manson’s crowning moment.