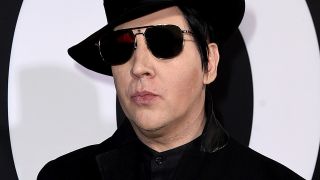 Marilyn Manson has spoken about the ideas behind his highly anticipated new studio album.

The follow-up to 2017’s Heaven Upside Down is expected to be released before the end of the year and sees Manson once again team up with Shooter Jennings, with whom Manson collaborated on a David Bowie cover in 2016.

Asked by Revolver if he had a name for the record yet, Manson responds: “It's still to be determined, but I think it’s the album that should be called Marilyn Manson."

He explains: “I’m in a mode in life where I wanted to tell stories with this record, and it's sort of like a wax museum of my thoughts, a study of the chamber of horrors in my head. All the romance and hope you can have in the world, here in the End Times where it can be a different kind of apocalypse for each person listening to the record.

Last month, Manson welcomed drummer Brandon Pertzborn into his band following the departure of Gil Sharone in March. And, asked about who is joining him and Jennings on the record, Manson says: “My guitar player, Paul Wiley, is also working on some stuff for it, as well.

“I have a new drummer in my band, Brandon Pertzborn, so he'll probably be playing on the record. And Jamie Douglass, Shooter's drummer, he's also played on some stuff.

“Shooter and I also did a cover of The End by the Doors, for a new mini-series of The Stand by Stephen King, which I'm also going to be acting in. I think that sort of kick-started our process for the album, and started us exploring different things.”

Manson and Rob Zombie will kick off The Twins Of Evil: Hell Never Dies Tour in Baltimore later tonight (July 9), while it was also recently revealed that Manson would star alongside Sharon Stone in new HBO series The New Pope.