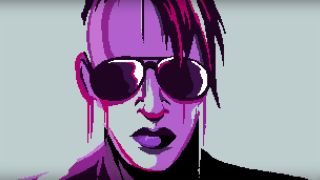 Marilyn Manson and Shooter Jennings have appeared in an 8-bit animated video for their cover of David Bowie track Cat People.

It features on Jennings’ album Countach (For Giorgio), designed as his tribute to electronic artist Giorgio Moroder, who produced the Bowie version that appeared in the soundtrack for 1982 movie Cat People. Bowie recorded a second version for his 1983 album Let’s Dance.

Jennings last year told Classic Rock: “It’s an all-live band but we’re doing all Giorgio tunes – stuff from 1977’s From Here To Eternity and things like that. To me it sounds like Queens Of The Stone Age when you have a live band doing all his stuff.”

He later said of his collaboration with Manson: “I invited Marilyn to a party, and I said, ‘You know Cat People? You’d sound awesome doing it.’ He was like, ‘I sing that song every night before I go on stage.’”

Meanwhile, the latest episode of Iggy Pop’s BBC Radio 6 show Iggy Confidential can be heard online, featuring his own personal tribute to Bowie.

Iggy selected his favourite songs from memory. He says: “I took out a piece of paper and a pen and closed my eyes and just remembered what I liked at different times. I’m weighing things that are a little more low on the totem pole, but not obscure.”

The two-hour show also features his memories of Bowie. It can be streamed until August 28. Manson is currently touring North American with Slipknot.