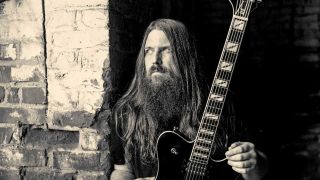 “The early 90s were such an important and vibrant time for rock music in general, and I feel like Black is one of the great songs from that era,” says Morton. “Our approach in covering it was to present a super stripped-down version, sticking the essence of the song. It’s got a very lonely feel to it and Mark Morales delivered an absolutely incredible vocal performance."

As well as Black, Morales sings on another song on the EP, All I Had To Lose. Additional guest vocalists include Lzzy Hale, who sings The Black Crowes' She Talks To Angels, Killswitch Engage/Light the Torch vocalist Howard Jones, who sings Love My Enemy, and Moon Tooth vocalist John Carbone, who appears on The Fight.

Ether was produced and mixed by Josh Wilbur, who has previously worked with Lamb of God, Gojira, Trivium, Korn and Megadeth. It's available now.

“Once again, I’ve had the great pleasure of working with some amazingly talented artists and friends to assemble this collection of tunes, all of which feature a strong acoustic guitar component," says Morton.

He adds: “Inspired by the acoustic sets I had the opportunity to perform last spring and summer in support of Anesthetic, I began writing some new songs to reflect that more mellow vibe."

Morton will play in The UK with Lamb Of God in April 2020.