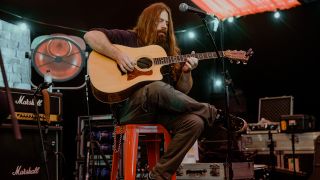 The Lamb Of God guitarist will launch Ether in January on a date still to be confirmed and it’ll feature guest appearance from Halestorm vocalist and guitarist Lzzy Hale, former Killswitch Engage vocalist and current Light The Torch man Howard Jones, Mark Morales from Sons Of Texas and Moon Tooth’s John Carbone.

Morton says: “Once again, I’ve had the great pleasure of working with some amazingly talented artists and friends to assemble this collection of tunes, all of which feature a strong acoustic guitar component.

“Inspired by the acoustic sets I had the opportunity to perform last spring and summer in support of Anesthetic, I began writing some new songs to reflect that more mellow vibe.

“I’m stoked with the results and I can’t wait for everyone to hear what we’ve been putting together. I’ll be debuting these tunes on my upcoming UK acoustic tour, so you can hear them live before they’re released anywhere else!

“I continue to be honoured to have the chance to work with so many incredibly talented people and I remain beyond grateful to the fans that have come along with me and supported these projects. Thanks so much everyone!”

The first single, All I Had To Lose, featuring Morales, will be released on January 10, with the EP also featuring a cover of The Black Crowes' She Talks To Angels and Pearl Jam classic Black.

Along with his solo dates in the UK next month, Morton will also play in the country with his Lamb Of God bandmates in April 2020.