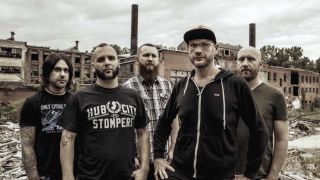 Team Rock caught up with guitarist, producer and cape enthusiast Adam D and challenged him to rank the band’s albums in order of personal preference.

After a couple of beers and some time spent deliberating, this is how he rated their releases…

“My least favourite Killswitch Engage record is the second self-titled record. You can even get the vibe from the name of the record; we were in a weird place on that one. That was pretty much mostly due to Howard being in a really bad place, and we ended up hiring an outside producer [Brendan O’Brien] because he didn’t want me to record him; he was burnt out on me busting his balls in the studio. So we went into it with some strange vibes and I think that’s pretty evident in the actual record. Some of the lyrics and Howard’s vocal deliveries could’ve been better, too. But maybe that’s also just me being a bitch because I didn’t produce it [laughs]. Who fucking knows? I think a lot of guys in the band actually agree with me though. Perhaps we just associate negative times with the making of that record.”

“I’m gonna go out on a limb here and say the first self-titled record next. That was us kind of becoming a band, so it’s got some cool memories to it, but when I think about the songs on that record they aren’t really in any of our show rotations so they’ve kind of just faded away a little bit. I’m not saying I hate the record or anything like that, it just feels like we didn’t really have our personality yet. But it was still a cool moment in our career and our lives, and I have lots of good memories from starting the band and making our first record together. I just think we have records with much more important songs on them; this one was quick and dirty, like a cheap prostitute [laughs].”

“It starts getting a little tricky from hereon out, but next up I’ll have to say As Daylight Dies. I like the way that record sounds, but we ended up tracking the drums in a strange studio where the room tones were really difficult to work with, so I personally struggled with some of the drum engineering on that record and some of the tones were a little tough. There aren’t really any negative connotations with that record aside from the engineering issues and me pulling my hair out in the studio, and there are some really important songs on the record that gave the band a little more notoriety, but I think some of the other records had a bit more impact on the whole career of the band. We were definitely firing on all cylinders around that time though, and people were really starting to take notice of the band.”

“It’s funny, but I have to say Incarnate for number four, but only because we haven’t really toured it that much yet. That’s the only reason; we haven’t seen a lot of shows with people losing their minds over the songs off that record yet, because we literally just started touring on it. That’s a really bad reason for it to be number four I know, but once you make a record the tour cycle is part of it and it’s not until the whole thing is wrapped and done that you can stand back and look at what you’ve achieved, and watching how crowds react to specific songs is always part of how the record feels - for me at least. I love how this record feels compared to the last one though; it’s much moodier and darker. We went for a more aggressive record last time, and this time we wanted to do something a little more atmospheric and varied. I really like the tunes on the new record and I’m really proud of how they came out, I just want to see them grow in front of the live audience.”

“The bronze medal goes to Disarm the Descent. That was the one where everybody was really excited that Jesse was back, and we made a really fast and aggressive record. We really saw people gravitate towards that record, and it was a really reassuring feeling knowing that we could go on and keep doing what we’re doing. So the making of that record was all good vibes and we were all really happy to be doing it still; it was almost like Times of Grace part two but with completely different music. And of course all of the other band members were excited about it too, and all that excitement made this big bubble of positivity. In Due Time became an instant Killswitch classic as well, and it always goes over great live. That’s a really good feeling when you hit that stride again.”

“This is a really tough choice for me, but silver has to go to The End of Heartache. This was one of the most important records of our career, and it was obviously the first record with a different singer after Jesse left. We experienced really strange vibes making it because we didn’t know how our fan base – that we’d just established – was going to accept having a different voice. It’s always scary losing the singer of your band because they’re the least replaceable component, and their lyrics and style is the main image of your band. So I remember going into that one being quite stressed, and working really hard, and pushing Howard really hard to try and make it the best possible record we could do. We also had lots of fights and discussions with our record label and there was a bit of drama because everyone was really nervous about the record coming out, but if anything that just made me want it to be better. So there were lots of rewrites and we really beat it up, but it ended up being one of the most important records I’ve ever made and the fans definitely accepted it. Then things just kept blossoming and even more people noticed us. I actually remember when Jesse tried out to come back in the band we told him, ‘You have to sing Howard’s songs because they’re an important part of our career and Howard did a great job of those songs.’ He was a little unsure of himself at first as he didn’t want to sing someone else’s material, but I think he did a great job and they still feel like our band when we play them live today.”

“Number One has to be Alive or Just Breathing, just because when I think about the entire career of the band, seeing from where we came from to where we are now, that was probably the most important step we’ve ever made. We went from being this regional band from New England to someone that people all over the world knew who we were, and to see that happen was insane. I was just a local hardcore kid who grew up playing local hardcore shows and never really travelled anywhere, and all of sudden we were doing tours all over the world and getting all this notoriety and having people talk about us in the press. It was absolutely life changing. I just thought I’d give the band a shot for a year and then go back to my desk job, and then a year passed and everything took off for us and we just kept pressing on; the vibes were right, people were digging us and the shows were good, and seeing that encouraged us to keep at it. There are still songs from that record that stay in rotation too, and people still know them and still sing along. And My Last Serenade is one of the most important songs in our set list. People gravitated to that one immediately. So we owe a lot to Alive or Just Breathing.”

Killswitch Engage tour the US this summer, then return to UK with Bullet For My Valentine in November. For more details, click here.