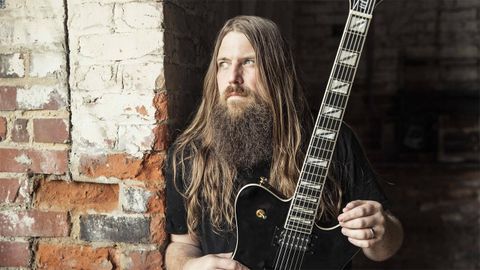 To bring his solo debut to life, Lamb Of God guitarist Mark Morton has convened some of his well-known mates to help him out. Collaborators include LOG bandmate Randy Blythe, Papa Roach’s Jacoby Shaddix, Testament’s Chuck Billy and the late Chester Bennington, along with a first-rate cast of rhythm players from the likes of Megadeth, Trivium, Alice in Chains and Clutch.

All-star projects are, of course, nothing new, and Anesthetic’s format recalls Slash’s first solo outing, with one guitarist anchoring a diverse roster of high-profile vocalists. Unlike Slash, however, Anesthetic exudes a fiery creative synergy and a boatload of soul. Opener Cross Off showcases an electrifying posthumous turn from Chester Bennington, whose concussive roar and jagged lyrics dovetail perfectly into Morton’s slamming riffage.

The safe play would have been to recycle a stack of unused LOG riffs and bring in some death metal growlers to pander to his core audience. Thankfully, Morton’s ambitions stretch further. Reveal, featuring multi-instrumentalist Naeemah Maddox, is a smouldering amalgam of blues and rock, underpinned by jazzy chord progressions. Likewise, Mark Lanegan poses a curious addition, but his portentous, ragged turn on Axis stands among the album’s many highlights.

But of course, you’re here for the bangers. Randy Blythe’s duet with Arch Enemy vocalist Alissa White-Gluz morphs from its bluesy intro into a full-tilt belter that will fill LOG fans with teary-eyed delight. Back From The Dead erupts with the squall of Morton’s booming riffage and the apocalyptic howl of Buckcherry’s Josh Todd. If you’re driving, crank this track at your own peril.

These days, a superior metal album might have four or five standout tracks; Anesthetic boasts at least six. From top to bottom, it’s a highly-potent, uncut shot of pure sonic adrenaline that establishes Mark Morton as a bona fide star in his own right.

Anesthetic is out now via Spinefarm/WPP