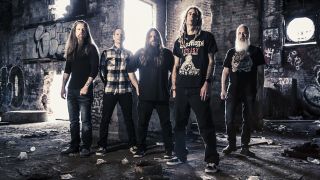 Since forming in Richmond, Virginia, in the 1990s, Lamb Of God have been spreading their Pure American Metal across the planet. We asked guitarist Mark Morton to rank their albums from best to worst (and no, Burn The Priest records don’t count, sorry!).

“Gospel’s special because it was the first, but it sounds like crap. The remixed, remastered one sounds way better. We just showed up for a week, tracked all the music live so there’s less mistakes, which is cool, that can be charming. We didn’t know a lot about tone and stuff yet, and really were learning to operate in the studio environment. Our producer, Steve [Austin], was from this sort of underground, noisy world. I think it’s great for some of the stuff he’s done, but I don’t think it was the best match for us, because we need a certain amount of clarity and definition for you to understand what we’re attempting to do. We were all amazingly unprepared, and we were still just a drunken mob back then. We showed up, and plugged in, and did what we were doing anyways except there was tape rolling.”

“Resolution has really great songs on it. My problem is that it’s about four songs too long. A great album you have to be able to listen to start to finish, like Slayer’s South Of Heaven. And with Resolution you can’t really do that. It’s 14 songs, and three or four of ’em shouldn’t be there, and we were all kind of in-fighting at that point in time, because everyone gets their little darlings and you want your little darling to be on the album. So the compromise was, ‘We’re gonna make a long album’. The pulse of the album was fucked up because it was too long, and it was hard to sequence. There are a few sets of songs where they both kinda do the same thing, but one does it better than the other and they’re both there. But there are great songs on there.”

“A lot of people say it’s their favourite. I think there’s great songs on that album and I think there’s some misses. Laid To Rest, big song. I remember feeling a lot of pressure when writing and recording that album. We’d started touring Palaces, and then we signed to Epic, and they wanted it out. And it’s like, ‘Shit, we just put out an album,’ know what I mean? ‘We don’t even have songs yet, and now we’ve got to go and write our major label debut. And not go through the normal process of having the time to build up songs and when we’re ready, write the album.’ But it was also a great test, because I think we did prove ourselves with that, and we’re still here and we’re still on that label in the States, so obviously it worked.”

“Sacrament has some of what I still think are our best songs on it. People are probably going to boo and hiss, but for me, Walk With Me In Hell was the first time we did a well-written song that really fully incorporated everything we do. It’s still a mainstay in the live set right now; I think we wrote and recorded that song in '05 or '06, so it’s been around for 12 or 13 years. The lyrics are really personal to me. I’d say it’s one of the top five songs we’ve ever written. And Redneck! Redneck was groundbreaking for us. There were people that were now coming to see us play that weren’t when our biggest song was Black Label. You know what I mean? It opened up a new section of audience for us, and that was exciting to be a part of.”

“That was when we were really starting to recognise what we were doing as songwriting, instead of just stringing riffs together and barking over the top off it. On Palaces, we started going, ‘Wait a minute, this part needs to repeat because it sounds catchy.’ We didn’t realise that’s because it’s a chorus, dumbass! You want it to happen three times, and probably twice at the end, because it’s the fucking chorus. So like, let’s do that. And there’s this youthful naiveté about that album. And it sounds like shit and that’s exciting, because we didn’t really know what we were doing. And I think there’s a charm to that. There are some really great songs on there where we had no idea what we were doing. But now it’s like, ‘Goddamn, what were we thinking? How do I tap back into that?’ Because you can’t unlearn something, right?”

“I think Wrath is really underrated. And I don’t sit and listen to our albums, but I think about the tracklists and I think that was just really… my only criticism is that it might be a little bit linear, like a little bit kind of all in the same lane, but with the songwriting, we were all functioning on the same level there.”

“I think it’s our best-quality work, top to bottom. I don’t think it’s necessarily a lot of people’s favourite Lamb Of God record, but I understand why that is, because your favourite record is always when you first get into a band. The reason why it’s my favourite album right now is probably the obvious reason – because it’s the newest material. I haven’t been sitting with it for 15 years. I think that it’s a very diverse album, I think Randy is particularly spectacular on it, I think he shows how well he can sing and shows his range not only as a vocalist but as a lyricist. Musically, it was the first album in a while where most of the songs were collaborative with me and Willie [Adler, guitarist], instead of bringing in songs like, ‘it’s a Mark song’, ‘it’s a Willie song’. But we thought it would get back to that As The Palaces Burn feel, where the songs become a little more dynamic. We would take our ideas and mash them together on purpose, to see what we could come up with. I think 512 is one of the best songs we’ve ever written. I think Overlord was thrilling to hear and to be a part of, and Embers is one of my favourite songs on the album. It’s super personal to me, and Chino [Moreno, Deftones] is just amazing on that. I feel proud of it and I was really, really humbled by the response to it. To be in a metal band – an at times unlistenable metal band – and have your seventh album be that well-received is pretty special.”