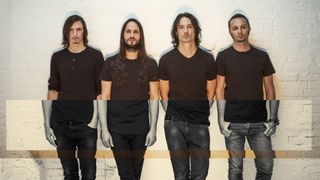 For over fifteen years, Gojira have cultivated a bludgeoning and constantly-evolving sound, fortifying their thunderous death metal undercarriage with thrilling infusions of of prog, groove metal and luminous atmospherics. In a year that saw the French metallers draw rapturous praise for Magma, their evocative sixth campaign, Gojira have emerged as one of the most important metal outfits on the planet. We sat down with guitarist/frontman Joe Duplantier to look back on the band’s history.

” Back then, we were into Sepultura, Morbid Angel and Death, mostly, but then we were also open to other things. I remember listening to a lot of Mike Oldfield when we were writing the songs. It took us about three years to write this album, from when we first started playing together to when we decided to record an album. Our lyrics were really different – a lot of the songs were about love and confidence and becoming a better person. So we were definitely not evil but our main influences musically, were evil bands ha ha ha. It’s an interesting mix. Listening to this album now feels weird but since we re-mastered and re-released it recently, I had to listen to it to make sure there were no mistakes and such and I actually enjoyed it, although I almost dreaded listening to it. I was thinking, ‘We were so young, and we weren’t tight and the guitar sound is horrible and there’s too much low end,’ and this and that. I love the sound of the snare on this record. The drums sound really, really good. The overhead microphones are a bit saturated – it’s a bit crushed – but it gives this very cool feeling. Sound-wise, I think the drums are the best thing on this record. “

“We composed all of these songs in one year. We had the feeling that we weren’t just another death metal band – we had other things to explore and this is really the beginning of that sound. And also we recorded and produced the record ourselves. We did it at home, like most of our records, and it’s a bunch of mistakes put together to create this interesting sound ha ha ha. We did everything backwards and super-wrong, but the result is something super-personal and very, very dry. It’s very in-your-face. There’s almost no delay on the vocals, there’s no reverb – it’s all very raw and very honest. And we confirmed something lyrically, and the message of Gojira became a little clearer on this record. It’s a lot about being in tune with the world and it’s about making the right choices in life and going through life as wisely as possible. Again, this is a goal we have – it doesn’t mean that we’re that – but this record is heading that way. It’s less professional than the first record, but more personal.”

From Mars To Sirius (2006, Listenable Records)

“This was our breakthrough. We signed our first deal to release our music overseas and outside of France, basically. The first record was a very under-the-radar release and the second one we had some marketing around it, but just in French magazines. On the third one, we released it in Europe and the States, almost at the same time. I don’t know if we realised how special the record would be when we were recording it because when you’re in the middle of something, you don’t analyse it the same way as somebody outside looking in. We weren’t thinking much about the past or the future, just the present. I was reading Life And Teachings Of The Masters Of The East, The Celestine Prophecy, The Third Eye and a lot of books that discuss different realities and how things are more than they seem to be. There’s a sacred dimension in every thing, every thought, every situation, every movement and every conversation that we have in our everyday lives. I was really interested in these things and this album is really about looking into outer space and other worlds and the possibilities of alien life and different realities.”

The Way Of All Flesh (2008, Prosthetic Records)

“Lyrically, this album is about death. It’s something we all have to go through eventually and this was a time in my life where I realised that I was going to die and there was nothing I could do about that. Through all the albums, if you read the lyrics, it’s a big quest with lots of existential questions. Sonically, we had to learn to be more spontaneous, less complicated and more straight-to-the point. We had this vision to get rid of layers and I guess that on The Way Of All Flesh, that’s what we did. The riffs really came from the guts and it was a pretty interesting process. We also decided to get help with mixing on this one, so we reached out to Logan Mader to mix the record. We decided to record drums with him to start the whole thing, so he’d help us to avoid all of the mistakes that we’d made in the past and as a result, this album is cleaner and has a deeper sound. Personally, it’s my favourite-sounding record that we’ve done. The production was stronger, but at the same time we didn’t give up on the experimentation; we changed the tuning a bit on some songs and we had some pretty epic intros and outros and some interludes. I’m really, really happy with this record, but of course, I still hear the mistakes ha ha ha.”

“The Way Of All Flesh was our longest touring cycle and it was so intense that everybody got burnt out. There was a lot of restructuring happening and we also took a little time off to do other things. I moved to New York and so many things were happening so there was a delay between records. L’Enfant Sauvage was the beginning of something big and new for us. It was about experimentation and research. I feel like we have a sound to begin with. We have an ideal of what we want to hear – this crushing, yet soothing and interesting metal sound. That’s what we aim for from the beginning so it’s not like we get to the studio and then start figuring out what we’re going to do. With L’Enfant Sauvage, we tried something else with Josh Wilbur, who co-produced the record with me. We went for something super tight and powerful, but with even more epicness in the song structures. We’re following a path toward the ultimate sound that we haven’t found yet, but we’re still working on it.”

“We built our own studio and we started everything from scratch, but it was the greatest feeling in the world. I wanted something more organic than the big production of L’Enfant Sauvage. I wanted something a little more less-distorted, more natural and with more vocals, more epicness in the vocals and more simplicity in the riffs and the guitar sound and I think that we achieved that. I’m very, very happy with it, but it was an incredible amount of work. This time we wrote about 25 songs and there’s only nine songs on the record. In the past, we would do write fifteen songs and fourteen would go on the record. This time we composed a bunch of songs and we were like, ‘OK, that’s it – we’ve got the record.’ But then we were like, ‘Wait a second, let’s write another song with that cool riff we had.’ In a way it sounds pretentious that I’m not surprised by the critical praise, but I’ll say that I’m half-not-surprised and half-surprised because of all the work we put in. There’s still a message element, especially in Silvera, and the chorus, ‘If you change yourself, you change the world.’ We need to take responsibility for what we do. It’s deeply-rooted in all of the background of our albums. Our music is inspired by different thoughts and books, but it’s all very spiritual as well. All of the other songs are more like daydreams – they’re something different.”

Gojira are touring the UK with Volbeat and Alter Bridge at the following dates:

Gojira's Joe Duplantier and the power of positive thinking

Gojira: There’s no such thing as a perfect album