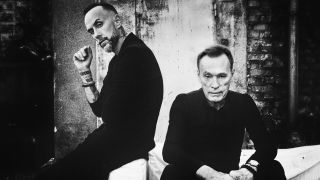 Me And That Man

Behemoth’s Nergal has released a video for his track Ain’t Much Loving.

He’s been working with musician John Porter on material under the Me And That Man banner – and sees the Polish metal vocalist make a radical departure from his work with Behemoth.

The track is lifted from the duo’s upcoming album Songs Of Love And Death, which will be released on March 24 via Cooking Vinyl.

The record is described as “a journey across bleak, dust-ravaged plains, soundtracked by low-slung guitars and steeped in the rawest essence of rock and blues.

“The tracks draw on dark narratives familiar to fans of Nick Cave, Tom Waits and Leonard Cohen and crackle with an evocative, sinister aesthetic.

“Admirers of everything from Johnny Cash’s American Recordings through to the grim, frontier polemic of Wovenhand will be drawn in by these songs.”

Me And That Man will play London’s Jazz Cafe on March 26, with tickets for the show now available.

He said: “The more radical and more extreme they are, the more delighted I will be. The worst thing you can get is people just saying, ‘Yeah, it’s OK.’

“I want people to either say, ‘Fuck you, asshole. I’m throwing out all the Behemoth records because of all this crap you recorded.’ That’s what I would love to see on one hand.

“And on the other, ‘All that piece of shit Behemoth stuff you’ve done, I don’t want you to scream any more.’ I want to get both reactions.”

Behemoth are currently working on the follow-up to 2014’s The Satanist and have a handful of live dates scheduled for 2017.

The band have also just launched another beer in the shape of Fenix in collaboration with Browar Perun. They previously brought out the Sacrun pale ale and and an American amber ale called Heretyk.