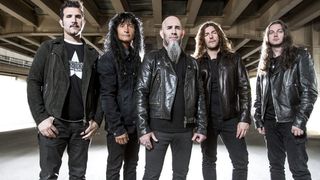 The band are currently on the road on their Among The Kings European tour, which sees them revisit their classic 1987 album Among The Living.

They kicked off the run of shows last week – and decided to capture a performance in the city as the band say they have a strong connection to Scotland.

Guitarist Scott Ian tells Glasgow Live: “I just think that Scottish people in general, not just Glaswegians, are generally more mental than people from most other places – and I mean that as a compliment.

“I have great friends in Scotland, too, so I always look forward to going there.

“There’s definitely a connection there both personally and professionally. Ever since our first show at the Edinburgh Playhouse in 1986, we’ve always had great shows there.”

Following the show, Ian played a DJ set at the city’s Cathouse. Anthrax played an intimate gig there in 2015 to mark the venue’s 25th birthday.

Ian continues: “I reached out to my friend Donald MacLeod at the Cathouse about it. I love that venue and some of my friends have DJed there before – like Killswitch Engage’s Jesse Leach. He did a thing around New Year’s Eve and had a great time.

“I just thought it would be a cool thing to do and a lot of people will probably be heading there right after our show anyway, so why not go there ourselves and keep the party going?”

While the band are playing Among The Living in full on the tour, they’re inviting fans to choose the rest of the setlist on their website. They have a list of 44 tracks, with fans urged to choose their 10 favourites. The songs that receive the most votes will make it on to the live set.

Anthrax’s last studio album was 2016’s For All Kings.

Among The Living: Anthrax look back at their classic album 30 years on