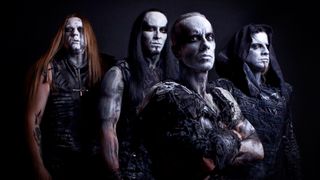 Behemoth’s rise from underground infamy to their current status as one of the most revered metal bands on the planet has been one of the most enthralling stories in our world’s recent history. As a result, when the Polish veterans hit the stage at Bloodstock this weekend to perform The Satanist in its entirety, it seems likely to be one of those magical, unforgettable moments that mark a great band’s passing from contenders to all-conquering heroes. But Behemoth were making extraordinary records long before The Satanist blew our minds and their catalogue is littered with infernal gems. Here are ten of the very best…

Black metal purists will doubtless disagree, but Behemoth only really clicked into gear on their fourth album. Eschewing the sonic primitivism of earlier releases, Satanica showcased a massive upgrade for the Poles’ sound, and it was on the album’s final track that their idiosyncratic identity came into the sharpest focus. With shades of industrial metal underpinning this thunderous, mid-paced paean to the dark side, it was an exhilarating warning of even greater, more terrifying triumphs to come.

Taken as a whole, The Apostasy was not quite the devastating follow-up to 2004’s breakthrough record Demigod that many were expecting. The album’s best moments were glorious, however, and At The Left Hand Ov God was the best of the lot. Imperious, ferocious and imbued with a near-chewable sense of hellish rage, it veers from slow-burning crunch to blistering bursts of speed, every last moment drenched in crazed dissonance and oozing blasphemous intent from every crusty pore. The closing tribal chant adds an extra layer of infernal magic.

“We would like to see most of the human race killed off, because it is unworthy of human life…” Behemoth didn’t exactly need to restate their fervent opposition to organised religion, but the spoken intro to this opener from the band’s fifth album deftly set the scene for the grandiose eruption of hate that followed. Like the rest of the album it appears on, Antichristian Phenomenon owes plenty to the brutal grandeur of Morbid Angel, but Nergal’s unique vision was beginning to bear dark fruit: the sheer voracity of the Behemoth attack made this an instant anthem for 21st century heretics everywhere.

One of the reasons Behemoth have routinely soared above their ‘90s peers is that the band have never spurned the essence of heavy metal along the way. As Above So Below is underpinned by a brutish, hulking, staccato groove that is as infectious as it is menacing, and the wild lead breaks that emerge from the resultant squall of pitch-black violence have just enough melodic content to betray Nergal’s devotion to the old school. Most importantly, As Above So Below is heavy as fuck and surprisingly accessible for a song wrenched from the depths of Satan’s own psyche.

Ah, that opening riff… yes, it’s a dead spit for the main riff in Be All, End All by Anthrax but what follows makes Scott Ian’s mob sound like a girl guide troupe. Conquer All is arguably the song that permanently sealed Behemoth’s status as one of the most important and potent extreme metal bands of the modern age. It’s grandiose and epic, but also intensely focused and almost minimal in its arrangement and execution. Meanwhile, “None of thy empty gods shall ever stand above me!” must rate as one of the most unequivocal rejections of religious hokum ever committed to tape. Bravo, Mr. Darski.

Extreme metal fans are not the easiest bunch to startle, but the opening track from Behemoth’s towering Evangelion album made plenty of us spit our Shreddies across the room. Daimonos is simply /savage/. As Nergal’s songwriting matured, so did his band’s ability to go for the throat: just listen to the moment when drummer Inferno rips into the song’s first blastbeat – it’s that’s pure power and unstoppable momentum that mark out the finest death metal bands and Daimonos has more of both than most like-minded bands could ever hope to harness. Subtle percussive tricks hurtle in from left-field, Nergal bellows like a man possessed and Satan gives the whole thing a hearty thumbs-up. +500 evil points.

Let’s not dick about: The Satanist is by far Behemoth’s greatest album to date and a genuine modern classic. O Father O Satan O Sun brings this masterpiece to a close with a jaw-dropping display of compositional ingenuity across seven minutes of genuinely unsettling extremity that once again proves the old adage that slow is heavier than fast and Satan is better than God. Moreover, it’s the dense, claustrophobic atmosphere that permeates every last second that makes the difference between this being just another great Behemoth tune or a major piece of dark, destructive art. Such is Nergal’s conviction – not to mention the backdrop of his successful battle with leukemia – that the only credible response is total immersion and surrender.

Death metal bands don’t usually have hit singles, as such, but if Behemoth do have a song that would grace any malevolent jukebox, Ov Fire And The Void is surely the one. Despite being subsequently overshadowed by The Satanist, Evangelion remains one of the finest metal albums of the 21st century, and this monumental blizzard of incisive riffs, warped hooks and snarled defiance is its most memorable and unnerving moment; the heart of Behemoth’s artful blasphemy boiled down to its hissing, otherworldly essence and liberally splashed across a gleaming chassis of pure metallic thunder. Even the Omnipotent Goatlord himself would struggle to avoid headbanging along to it.

When Nergal first brought this extraordinary song to the Behemoth rehearsal space, drummer Inferno remarked that he could actually /hear/ the cancer that his friend had been fighting to excise from his body seeping through the riffs. He’s got a point, too, because Messe Noire is truly disturbing in a way that most death and black metal never quite achieves. The chord changes are gruesome, the band’s ensemble performance thrums with queasy intensity and Nergal’s unwavering belief in art’s vital power has never been more eloquently expressed. It is, put simply, the most undeniable “Holy shit!” moment on an album that has plenty of them. Meanwhile, the song’s slower mid-section boasts one of the finest solos ever to grace a death metal record. Heroic behaviour all round.

Evidence of both Behemoth’s sustained evolution and their ongoing devotion to the spirit of the underground, The Satanist is a game-changer. While by no means a typical Behemoth anthem, its title track is the record’s giant, throbbing heart, rendered via deceptively traditional means and delivered with breathtaking levels of conviction and dexterity. Initially mid-paced, it slithers and grinds majestically for several minutes before exploding into hyper-speed violence, but even at full pelt, the considered and commanding power that Behemoth tapped into for their magnum opus ensures that the song is both utterly unique and curiously universal in its appeal.