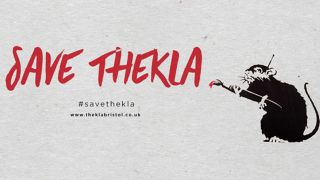 Bristol music venue Thekla is facing a fight for survival after proposals to redevelop the nearby Redcliffe Wharf were approved by city council leaders last night.

It was reported yesterday that if the plans to build homes, office and leisure space close to the club were approved, new noise regulations could spell the end of the iconic venue, which is moored in the Mud Dock area of Bristol’s floating harbour.

The Bristol Post say that a council planning committee voted in favour of the scheme by 10 votes to one.

That’s prompted a statement from Thekla, who have launched a social media campaign to help save the venue – urging fans to use the hashtag #savethekla.

The statement reads: “We are disappointed that despite our compelling arguments for a deferral of this decision until a suitable and sufficient noise survey can be conducted, this development in its current proposal is going ahead.

“We appeal to the developer to keep to the promise they made in this hearing to work with us on a new noise survey and then liaise with us on an improved sound insulation scheme to protect Thekla and their future residents against noise problems.

“We expect the council to follow up on the assurances they gave to councillors to only give the go-ahead once they were satisfied that Thekla would be protected from future noise complaints from residents of the development.”

The statement continues: “This is certainly not the end of the fight to protect the Thekla as we have to ensure that all parties keep to the commitments made this evening.

“We urge our supporters to contact their local councillors and MPs to ensure that the council does all it can to protect our venue’s future.”

Earlier this year, Iron Maiden frontman Bruce Dickinson condemned the closure of small music venues across the UK and called for more to be done to ensure their future.