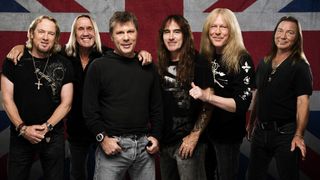 Iron Maiden frontman Bruce Dickinson has condemned the closure of small music venues in the UK.

Manchester’s Roadhouse, Leeds’ Cockpit and The Arches in Glasgow are just a few of the venues that have been forced to close their doors in recent years – and with Cardiff music hot spot Dempseys now being turned into a sports bar, Dickinson says more should be done to protect smaller clubs.

He tells Wales Online: “Sadly that seems to be happening in a lot of places. It’s the gentrification of the city centre, the dodgy hangouts which are really cool which kids like.

“We wouldn’t have been able to start out if there hadn’t been venues like that. The good thing is you don’t need a lot to have a place where you can have a racket and have people turn up.

He adds: “Just because something would be worth X a square foot, that is a case of people who know the price of everything and the value of nothing.

“These are vital things and the reason why people come to a city centre is to keep it alive. And it not just people who want to drink posh lattes, there are other people in the world who have cultural needs and rock and roll is pretty fundamental to people’s lives these days.”

Last year, the Sir Charles Napier pub in Blackburn was saved from closure by rock and metal fans, making it the UK’s first community-owned rock venue.

He said: “It’s great, not only for music but for the community as well – it keeps the community together. You can’t beat these kind of venues.”

Meanwhile, Iron Maiden will embark on the European leg of their The Book Of Souls tour dates later this month. Find a full list of shows below.

Why are all our music venues closing, and what can we do to stop it?