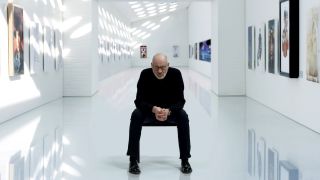 The brand new single from Fish, Garden Of Remembrance, is the latest song to be taken from his highly anticipated final solo album Weltschmerz.

The album is out in September, but the track can now be purchased through a variety of digital services while you can also watch the video below.

A poignant and personal piano ballad about the effects of ageing – the story of a married couple dealing with the onset of dementia – its accompanying video was filmed at the beginning of lockdown and directed by David Lam and Hannah Thompson, the daughter of Fish’s long term collaborator and illustrator Mark Wilkinson. And the social distancing measures necessitated by lockdown, oddly mirrored the song's lyrical concerns.

“The video involved a complicated approach as the whole country went into lockdown just as we were due to start filming,” says Fish. “I had to be filmed in front of a white screen in my home and then the gallery around me was created as a miniature 3-D model into which I was magically transported.

"Meanwhile the couple were filmed on an Essex beach, rather than in Scotland as intended. The gigantic glass wall across the beach was intended to symbolise the separation of the couple, however it came to take on another meaning as lockdown separated families across the country."

The result is a tender promo for a heartbreaking song. The emotion even got to the singer himself at one point, as you'll see in the video.

Fish has spent the last five years of his life making Weltschmerz – the title means “a feeling of melancholy and world weariness” in German – in which time he lost his father, moved his 87 year old mother in with him, endured a series of operations and illness, and watched as the world seemed to collapse in front of his eyes.

Buzz for Weltschmerz suggests that if this really is his final album, he's going out in style.

Weltschmerz is released on September 25. Pre-orders are being taken at Fish's own website.