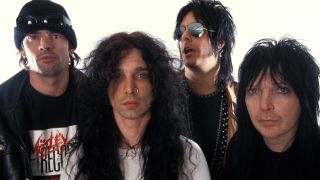 Here is TeamRock’s roundup of all the news snippets from around the world of rock and metal on July 10, 2016. Compiled by our news team at TeamRock HQ. For today’s bigger news stories, click the ‘News’ tab in the menu above.

Dead Daisies and former Motley Crue singer John Corabi has moved to put his feud with Nikki Sixx to bed.

The former bandmates have been involved in a war of words over Corabi’s role with the band after he replaced Vince Neil in 1992. Bassist Sixx said in April that the 1994 self-titled album recorded while Corabi was with the band had been a “painful” experience, and added that he hadn’t been impressed by the vocalist’s creative contribution.

Corabi initially stated that he “didn’t give a shit” about his ex-colleague’s quotes. But when asked again, he replied: “I have no idea why Nikki feels that I’m the biggest piece of shit to roam the Earth.”

Now Corabi tells Music Mania: “Honestly, I’ve just been a little frustrated. I’ve done a few interviews in the last week or so where people ask me some question about my time in Motley or some of the recordings I’ve done with Mick Mars or whatever, and it’s just, like, I’ll sit there and talk for 10 or 15 minutes and there’s no mention of The Dead Daisies.

“Obviously, I can’t talk about Motley Crue, because they don’t talk about the good things that I have to say about the guys or any of that – it’s just always focused on one thing, the negative, and I’m just tired of it. I’m not that guy.”

Cinderella singer Tom Kiefer says he’d have been “humbled and honoured” if he’d been asked fill in for Brian Johnson in AC/DC – but he doesn’t think he’d have taken on the job.

Before the job was given to Guns N’ Roses frontman Axl Rose, Kiefer’s was one of the names linked with the job once AC/DC revealed Johnson had been ordered to stop touring or risk going deaf and that they’d be continuing with a guest singer.

Kiefer tells Zoiks! Online: “I’ve seen my name brought up online, and I just wanna say — I guess this is the first time I’m publicly saying this — if I were asked, I’d be very humbled and honoured, but I would not leave my solo band. I love my band, and we’re having a good time out here. This is my home.

“I just don’t know that anyone can fill those shoes. Or if it’s somebody who’s known, it’s kind of weird — then it’s not AC/DC. It was so cool when they found Brian, because he wasn’t really known. And then he became known and then he became the voice of AC/DC. They’re one of the few bands who have been able to pull that off. I don’t wanna even touch those shoes.”

AC/DC bassist Cliff Williams revealed last week that he would retire after the band’s Rock Or Bust tour comes to an end.

Gojira frontman Joe Duplantier says living in New York while some of his bandmates remain is France has both its good and bad sides.

Duplantier built a studio in New York and Gojira’s sixth album Magma was recorded there. And the singer/guitarist says the distance isn’t a problem.

“At the end of the day, we still spend half of the year together on a tour bus or onstage. Sometimes, yes, we’d like to have a band meeting or to hang out and talk about something, but for that there’s Skype, and there’s other ways. Really, I don’t think we suffer from that.”

Magma has been voted Metal Hammer readers’ best album of 2016 so far, while the band will tour Europe with Alter Bridge and Volbeat later this year.

Five Finger Death Punch drummer Jeremy Spencer has given an update on the status of the band’s upcoming seventh album.

He tells Kaaos TV: “Well, we just have recently started, so it’s kind of in the beginning stages, but I’m digging what I’m hearing so far.

“It’s always fun to see where the band’s going and to hear new material and creating new stuff all the time, so we’ll see how it goes. Right now, things are turning out well, though. But it’s the beginning stages. It’s been a few weeks. It’s definitely in the infant stages. But so far so good.”

5FDP have signed to Rise Records after a dispute with former label Prospect Park.

Megadeth are set to announce a North American tour with Amon Amarth, Havok and Metal Church.

Blabbermouth reports that Megadeth frontman Dave Mustaine let the news slip while broadcasting for fans on Periscope. A fifth band is also expected to be added to the bill when the tour is officially announced this coming week.

Megadeth have been on the road in support of 15th album Dystopia.