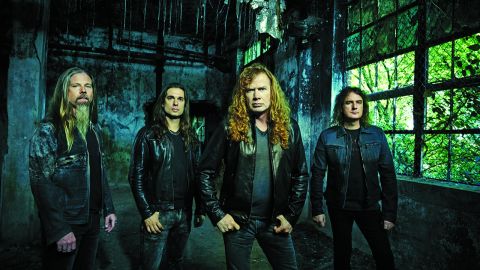 It’s amazing what a difference a bit of turmoil and resolution can do to the creative life of a veteran metal band.

When Megadeth released Super Collider in 2013, the response was, at best, mixed. Although nowhere near as bad as some critics made out, it was a largely pedestrian collection that boasted very little of the aggression and edginess that Megadeth’s fans tended to expect. We’ve been here before, of course (although Risk is another album with an excessively bad reputation), but one of the things that has long defined Dave Mustaine’s career is his ability to confound the cynics and, with an imperious sneer, flex those genre-refining muscles again. As a result, the fact that Dystopia is one of the finest records Megadeth have ever made should be less a welcome surprise than a reassuring return to the natural order of things.

Much has been made of the new lineup and its apparently harmonious constitution and it’s certainly true that Megadeth sound like a well-oiled machine here. New guitarist Kiko Loureiro’s virtuoso skills place him immediately on a par with revered former incumbents. Chris Adler can add ‘definitely not a slouch’ to his resumé too; his diehard fan’s intuitive understanding of this band’s sound means that everything he plays is just as the thrash gods intended. But with respect to the musicians involved, Dystopia’s brilliance is rooted in the songs themselves and how they demonstrate that Megadave has rediscovered the fire and finesse that made the likes of Rust In Peace and Endgame such milestone releases. It’s Megadeth’s 1992 masterpiece Countdown To Extinction that springs to mind most frequently here, however. There are plenty of technical twists, deft changes of pace and bouts of blistering showmanship on the brooding title track and the epic menace of Poisonous Shadows, but there are also huge, rousing choruses and riffs that demand the banging of heads. Best of all, that underlying sense of rageful disquiet that always set Megadeth apart is back in abundance throughout. Compare the snarling attack of Death From Within or The Emperor’s scornful clatter to the half-arsed plod of Super Collider’s title track, and it’s obvious that the happier Mustaine gets, the more he taps into the malevolent core of his life’s work. Even the instrumental squall of Conquer Or Die! sounds like a genuine threat, not to mention a two-man hurling down of the shredders’ gauntlet, Mustaine and Kiko sparking off each other in a state of haughty euphoria.

Sonically, too, Dystopia suggests that Super Collider was a momentary lapse of sanity. This sounds fucking monstrous, fervently modern and precise but underpinned by several fuck-tons of the kind of oomph that only emerges when bands are in the zone and high on passion. A closing cover of US punk icons Fear’s rampaging Foreign Policy contrasts starkly with the decent but perfunctory trot through Thin Lizzy’s Cold Sweat that brought Super Collider to a close. Invigorated by fresh blood and sounding more engaged and enraged than they have in decades, Megadeth are back on the very best of neck-wrecking form here. Thank fuck for that.

WHAT DID CHRIS ADLER AND KIKO LOUREIRO BRING TO THE SOUND?

“Chris is truly one of the premier thrash metal drummers out there. Same with Kiko, they can play anything we put in front of them. Chris has experience of session work outside of Lamb Of God, so that gave him a real maturity. He’d always talk about ‘my Megadeth’, meaning there were things from the past that he really wanted to see happen again on Dystopia, and yet there was clearly a time for new developments and ideas in the drum department. Things like Lying In State or the little double-kick drum patterns in Post-American World, they’re very much ‘Adlerisms’ that he brought into Megadeth.”

HOW EASY WAS IT TO TAP INTO THE AGGRESSIVE SIDE OF THE BAND AGAIN?

“I think Chris brought a natural excitement to the band. You can really hear his personality in the tracks. This is very clearly a Megadeth record, which speaks very highly to Chris and Kiko’s musical aptitude, that they can bring in their skill level, and also become a blank slate on the creative side, to bring in something fresh and new.”

WHAT BROUGHT ABOUT THE COVER OF THE FEAR SONG?

“We’ve always done a few cover songs, especially when we have the amount of time that we had to make this record. Fear has certainly been a band that we’ve tipped our hats to and offered accolades to as one of our – not an influence, but certainly an inspiration. And we figured Foreign Policy would be appropriate for today because of the lyrics, and also just the spirit, the mindset of the song.”