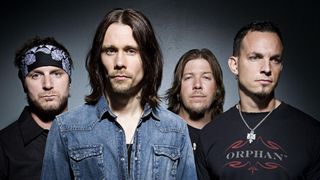 Alter Bridge will tour Europe in November and December this year, including seven shows in the UK with Volbeat.

Like A Storm appear at all shows, with Gojira playing at later continental dates, and another support act to be confirmed for the first 10 gigs of the 24-date run.

Alter Bridge last month signed a record deal with Napalm Records for the release of their fifth album. Frontman Myles Kennedy said: “We are pleased to be joining forces with Napalm as we embark on the next phase of our journey. We are very excited to see what the future brings and look forward to reconnecting with our fans in 2016.”

Tickets go on sale via venues at 9am on July 7 (Thursday) with an O2 presale the previous day. General sales commence on July 8.