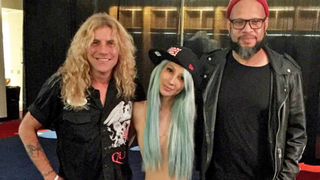 Steven Adler joined Guns N’ Roses on stage for the second time in a week, again playing My Michelle and Out Ta Get Me with the reunited group.

The drummer joined Slash, Axl Rose and Duff McKagan on stage at the Nissan Stadium in Nashville, Tennessee, to perform the same two tracks he played with GNR in Cincinnati on Wednesday (July 6).

After the show, GNR touring keyboard player Melissa Reese posted an image of herself with Adler and Frank Ferrer, the drummer who has been in the seat for the majority of the Not In This Lifetime tour, which continues on Tuesday in Pittsburgh, Pennsylvania.

Axl Rose reportedly introduced Adler as “my brother” when the drummer took to the stage last night.

Rumours had suggested that Adler would make an appearance at Guns N’ Roses’ first reunion show in Los Angeles in April, but that didn’t materialise.

Promoter LiveNation said this weekend that the Not In This Lifetime tour had been an “unqualified success,” despite reports of poor ticket sales for some of the dates.

Guns N’ Roses Not In This Lifetime tour remaining dates

Opinion: Why Izzy Stradlin was the heart of Guns N' Roses