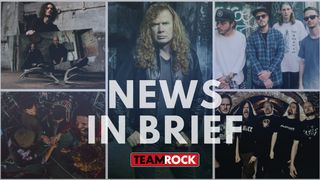 Here is TeamRock’s roundup of all the news snippets from around the world of rock and metal on July 17, 2016. Compiled by our news team at TeamRock HQ. For today’s regular, more in-depth news stories, click the ‘News’ tab in the menu above.

Megadeth have been forced to cancel the remainder of their European tour in light of bassist David Ellefson breaking his foot on Friday night.

The injury resulted in the band calling off their show at Rockmaraton in Hungary. They also had to pull out of their planned Harley Days performance in Slovakia on Saturday night, and have confirmed they won’t appear at tonight’s (July 17) Masters Of Rock festival in the Czech Republic.

Frontman Dave Mustaine says in a video message: “I want to let all our fans in the Czech Republic know that our performance tonight at the Masters Of Rock has been cancelled. Our bass player received a severe break to his foot. I’m very, very sorry to tell you this but we will make it up to you next summer. Please hang in there and stay metal.”

Megadeth’s next scheduled performance is in Ecuador on July 30.

Meshuggah to tour North America with High On Fire

They’ll be supported by High On Fire, with the new dates taking place in October and November, and come ahead of their previously announced European run of shows.

The follow-up to their seventh album Koloss is expected in the autumn.

Crown The Empire have released a video for their track Hologram.

The song features on the US outfit’s third album Retrograde, which is set to launch on July 22 via Rise Records.

Frontman Andy Leo says: “Hologram could only be written after touring 200-plus days a year for half a decade. It’s a self-examination of the people we’ve become and the relationships that we’ve carried through this period of growing up while a part of something more than ourselves.”

Crown The Empire are currently out on the road as part of the Vans Warped Tour, which runs through August 13.

Raveneye have confirmed that their debut album Nova will be released on September 23 via Frontiers Music Srl.

Nova is available for pre-order, while the tracklist and cover art can be seen below.

The UK outfit say: “The cover was created by our good friend Art of Inetta Key. Thanks to our label Frontiers Music Srl for the support. We cannot wait to release the songs and videos to you all. The next few months are going to be exciting – stay tuned.”

Moose Blood have announced a list of intimate shows across the UK.

They’ve lined up the performances in support of second album Blush, which will be released on August 5 via Hopeless Records. They’ve released Honey and Knuckles from the follow-up to 2014’s I’ll Keep You In Mind, From Time To Time.

The band said in a statement: “We’re so thankful for how amazing the past year went for us and we can’t wait to get things moving again.”