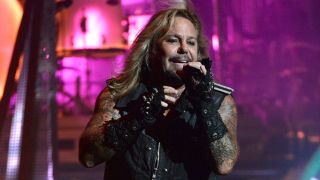 Former Motley Crue singer Vince Neil is being sued for $75,000 by a California woman over an alleged assault in Las Vegas in April.

Neil is accused of having assaulted the woman while she was trying to get an autograph from his lunch companion, actor Nicolas Cage, at the Aria Hotel.

Broadly reports the lawsuit, filed in US federal court by registered nurse Kelly Guerrero, claims she was trying to get Cage’s attention as he was wrestling with Neil, alongside comedian Carrot Top, as the three were leaving the hotel.

The suit states: “Then, as Mr Cage let go of Vince Neil and was walking away, Vince Neil attacked Kelly without warning or provocation. Neil grabbed Kelly’s hair from behind, yanking her down to the pavement on her back.”

The nurse adds that Cage came to her rescue by grabbing Neil in a headlock and shouting at him to “stop this shit now.” When the actor released him, Neil allegedly assaulted another woman, who ran out the hotel entrance.

Guerrero says her 14-year-old son witnessed the incident and that hotel security called police, who reviewed closed-circuit security video before charging him with misdemeanour battery.

The following day, the nurse visited the Desert Springs Hospital Emergency Room where she was diagnosed with a “back sprain or strain, neck sprain or strain and sacral contusion due to physical assault.” When she returned home to Santa Cruz, her primary care physician diagnosed her with a “fractured coccyx and a severe left hip injury.”

Neil could face a maximum sentence of six months in jail if convicted, according to local police.