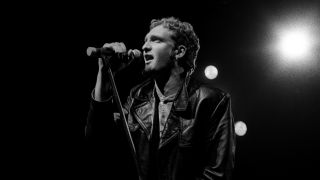 Alice In Chains guitarist Jerry Cantrell says he still has a hard time listening to the Black Gives Way To Blue, the group’s 2009 tribute to their original frontman Layne Staley.

After struggling with severe drug addiction, Staley died in his Seattle apartment in April 2002 from a mixture of heroin and cocaine while the band were on hiatus.

The remaining members regrouped in 2005 for a three-year run of reunion shows that featured a variety of singers, including former Madfly and Comes With The Fall vocalist William DuVall, who joined Alice In Chains in the studio for their 2009 comeback album Black Gives Way To Blue.

The project’s title track saw a guest appearance by Elton John on piano as the band offered a public goodbye to their fallen bandmate.

Cantrell exclusively tells the latest edition of Metal Hammer: “That song really set it in stone, because we had to properly address Layne’s death and say goodbye to our friend. We had done it privately, but if we were going to do this, we had to do it publicly. It’s a beautiful song and it’s still really tough for me to listen to.”

Black Gives Way To Blue was a Top 5 US and Top 20 UK album chart success.

Alice In Chains released their fifth album, The Devil Put Dinosaurs Here, in 2013, and are now considering plans to work on a follow-up after their 2016 tour, which recently including opening multiple dates for the reunited Guns N’ Roses.

The full interview with Cantrell can be read in issue 286 of Metal Hammer – out on July 19.

Alice In Chains 2016 US summer tour

Alice In Chains: the story behind Rooster