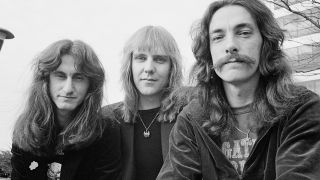 Rush have released a lyric video for their track A Farewell To Kings.

It’s been taken from the 40th anniversary reissue of the album of the same name, which arrived in December last year.

Reflecting on the recording of the album at Rockfield Studio, Wales, vocalist and bassist Geddy Lee told Prog: “The guitar at the start of A Farewell To Kings was recorded outside.

“The acoustic was recorded out there to get that really crisp sound and I remember Alex Lifeson was walking around this mic that producer Terry Brown had set up while he was playing.”

He added: “A Farewell To Kings was quite a different piece for us, because of the way the intro’s structured, and then it comes in with a bang and there’s this weird time signature going on. It’s a tough song to play.”

A Farewell To Kings 40th anniversary edition is out now.

In January this year, guitarist Lifeson confirmed that Rush had no plans to tour or record together in the future, adding: “We’re basically done. After 41 years, we felt it was enough.”

Producer Terry Brown on how Rush made A Farewell To Kings