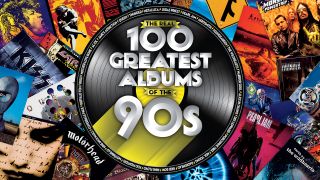 Contrary to received wisdom, the 90s was an amazingly fertile time for classic rock of all types: the big-hair brigade didn’t die, metallers got more inventive, new prog began its incredible rise, bands tagged as ‘Britpop’ released albums that truly rocked, stalwarts like Motörhead and Judas Priest delivered some of the best records of their career, and grunge was a lot more than just Nevermind.

The new issue also includes the first volume of Classic Rock’s Little Book Of Guitar Heroes. The book itself may be diminutive, but it’s stuffed full of tasty features on loads of the greatest guitar players in rock. Whether your thing is the jaw-dropping virtuosity of Joe Satriani or Steve Vai, blues legends such as Eric Clapron and Bonnie Raitt, metal gurus like Tony Iommi, rock icons like Jimmy Page or the man who took guitar playing to another level, Jimi Hendrix, there’s something here for you.

Issue 247 of Classic Rock celebrates the Real Best 100 albums of that much-maligned decade, with special attention paid to…

Buffalo Tom
In a post-Nevermind world, Let Me Come Over’s mix of Hüsker Dü and Van Morrison would cause ripples.

Live
With Throwing Copper, their heartfelt anthems captured the anger and ache of the moment in riveting songs.

Def Leppard
The story of the making of Adrenalize – hard rock’s last great blockbuster album of a golden era.

Gary Moore
How the hard-rock guitar hero recorded Still Got The Blues and began the most unlikely reinvention of the decade.

Thunder
Luke Morley looks back at Back Street Symphony, the album that produced the first great British rock band of the 90s.

The Wildhearts
A bunch of dysfunctional no-hopers fighting grunge, whose debut Earth Vs The Wildhearts was a masterpiece.

Pearl Jam
Their debut, Ten, struck a chord with a generation, after which their lives changed immeasurably. We venture back to 1992…

Dan Patlansky
Growing up against a backdrop of rave culture and political tensions, and battling personal demons, South Africa’s prime blues-rock export hasn’t had an easy ride to success.

What’s on your CD

Q&A: Myles Kennedy
Alter Bridge’s frontman and Slash’s singer on loss, almost being in Led Zeppelin and thankfully not being a Kardashian.

CR’s Social Club
Write! Rage! And more! Just a few of the many things you can find when you head over to classicrockmagazine.com

Live Previews
Must-see gigs from Yes, Skid Row and Michael McDonald. Plus full gig listings – find out who’s playing where and when.

The new Classic Rock is on sale now at all good newsagents, or directly from us.