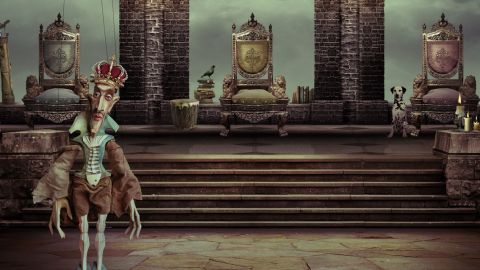 A Farewell To Kings, first released in September 1977, is the album on which Canadian trio Rush became the biggest underground band in the world.

After sounding like Zeppelin on steroids on their 1974 debut, they did their best to wriggle out of that straitjacket by adding prog to their metal. They teased us with eight and a half minutes of fantasy rock called By-Tor And the Snow Dog on their second album, then confused us with the side-long The Fountain Of Lamneth on the third, then left us awestruck with the titular first side of 2112 in 1976. No matter how clever they sounded, though, they remained a guitar/bass/drums combo. To truly come of age, as they do here, they needed a fourth element – synthesisers. Initially, we thought they’d gone soft, but looking back, they were honed diamond-hard.

Coming after their All The World’s A Stage double live album – the first in what would be a series of epoch-closing in-concert packages – their fifth studio release was bound to be a fresh start. But no one expected it to sound this different. True, they had employed keys, sporadically, on 2112. But here, while lyricist Neil Peart festooned his drum kit with all manner of wooden and metallic percussion, both bassist/singer Geddy Lee and guitarist Alex Lifeson adopted Taurus bass pedal synths. More significantly, Lee played a Minimoog.

In truth, he was behind the curve – Keith Emerson and Rick Wakeman having taken to using Minimoogs around 1970, for studio work and touring – but for Rush it was revolutionary. It opened up a world of possibilities for future development, while at the same time setting unexpected challenges in live performance.

Such problems were the least of their worries as they began what now seems a short three-week residency at Rockfield Studios in South Wales. Recording for the first time outside their native Canada removed the distractions of family and friends… but the band were quickly homesick and fazed both by the remoteness of Rockfield’s isolation and the cumulative pressure of four years of almost non-stop touring. There’s no way that anything good should have come out of such circumstances, but Kings is better than good. It’s Rush at their peak.

For 38 minutes it takes the listener on an extraordinary journey, first lulled by an acoustic guitar before the swaggering hookline and revolutionary history motif on its opening title track, then buoyed all the way to the frantic riffing and the heart of a black hole at the end of final number Cygnus X-1. Even the least-loved track, Madrigal (a mournful lament meandering to a sleepy fade) has improved with age.

Add to that the unlikely UK Top 40 hit Closer To The Heart (led by Peart’s glockenspiel and judicious use of vibraslap) and the joyful rocker Cinderella Man (featuring Lee‘s extraordinary and, at times, ridiculously funky bass-playing) and you’re getting warmer…

The afterburners on this album, though, are its two epics: the aforementioned space-rock riot Cygnus (which begins with echoey effects and producer Terry Brown‘s synthesised spoken intro, and ends with Geddy Lee screeching the line, ‘Every nerve is torn apaaaaart,’ like a method actor) and the peerless Xanadu (Peart’s soaring and imaginative take on Samuel Taylor Coleridge’s poem Kubla Khan). With dazzling guitar by Lifeson and evocations of pleasure domes and honeydew, Xanadu remains Rush’s Stairway To Heaven. Goosebumps guaranteed.

The brilliance of the above mean you’ll soon learn to live without this multi-format expanded package’s bonus quartet of cover versions, the most pointless of these being Dream Theater’s to-the-second, note-for-note interpretation of Xanadu. Big Wreck (metalling-up Closer To The Heart) and fellow Canadians The Trews (with Cinderella Man) at least counterpoint Lee’s infamously higher-pitched delivery with the respective voices of Ian Thornley and Colin MacDonald. But only Chilean Alain Johannes (sideman to the Foos and Them Crooked Vultures, among others) has the courage to truly rearrange, with a fine reworking of Madrigal.

Also included is Cygnus Ex-2 Eh – by Rush themselves – but these four minutes of experimenting with textures and echoes really should have remained an outtake.

The big bonus, then, is the full 98-minute live show from Hammersmith Odeon on February 20, 1978 – from the first tour to feature material “from our Kings album”, as Geddy introduces it. The set-list is similar to All The World’s A Stage, but drops some of the older material to make room for Xanadu (the expectant cheer as it begins indicative of the impact it had already had), ’Kings itself, Cygnus X-1 and, as a closer, Cinderella Man. Other highlights are the full version of 2112 and a great segue that welds Working Man to Fly By Night. It all leads to the conclusion that this might just be better than any Rush live album previously released – it’s far beyond the sum of its musicians’ parts. Remember: there are only three guys in Rush.