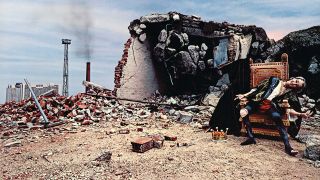 In the latest issue of Prog Magazine, we get the full inside story from Alex Lifeson and Geddy Lee about how Rush made their seminal fifth album, A Farewell To Kings. Below, to help celebrate the album’s 40th year, we gather a selection of prog luminaries to discuss the impact the album had on them. Spoiler: There’s a lot of chat about Xanadu.

“I remember listening to the title track on A Farewell To Kings for the first time and hearing Alex Lifeson’s acoustic intro and it was spellbinding. A friend of mine played the album to me while air drumming intensively, really close to my face, along with Neil Peart’s extraordinary playing. It was quite annoying but worth the sonic experience! …Kings is a masterpiece and an innovative musical journey. We recorded our last two albums at Rockfield Studios in Wales and just to be there, knowing that A Farewell to Kings and Hemispheres were recorded there, was inspiring to say the least.”

“I’ve always had a soft spot for epic tracks and this one is definitely that! Geddy is singing at the top of his lungs and you get a spooky vibe, a feeling of loneliness in space.”

“To me personally, A Farewell To Kings marks the beginning of their best period, Rush at the very top of their game, together with Hemispheres, Permanent Waves and Moving Pictures. They were marvellous before and after too, of course, but this quartet is sacred for me. I think Rush really found themselves on this album. 2112 was just an introduction, this one was more refined. I also enjoy the production – it’s rough and crystal clear at the same time. And that nasty Rickenbacker… oh man, no one plays it like Geddy! Simply fantastic. I even excuse the extensive use of church bells…”

“Xanadu has all the qualities of a really long and epic song. It’s interesting all the way through, and all the different parts work seamlessly together. It has one of the coolest Rush riffs of all time in it and every Rush fan in the world knows exactly what riff I’m talking about! It’s the signature Rush song and just maybe the Rush song.”

“It was 1985, I was 13 years old and beyond Black Sabbath, I had little use for 70s rock. It was plodding, bluesy and meandering. But this album exploded with colour, light and revelation. Significantly, this may have been the first time I knowingly heard music in 7⁄8 time. Over 30 years later I still haven’t managed to shake that epiphany off. Was this really being made by only three people? Like any thrill seeker with a gateway drug, I naturally went on to the harder stuff, but it was A Farewell To Kings that opened my ears.”

“A Farewell To Kings was my doorway into Rush, and Rush, perhaps more than anyone else at this point, were my gateway band into a strange, psychedelic world from which I would never return. Like the protagonist of Xanadu, I had dined on honeydew and drunk the milk of paradise and there was no going back.”

“As a young lad in my first school band, I used to listen to literally nothing but Iron Maiden. Not so my bandmates, brothers Phil and James Hearley. They bowed at a different altar, one belonging to Rush. As a kid, the most important part of developing a loving relationship with music is down to the act of discovering it yourself. I’m not suggesting that I was forced at gunpoint into the world of Rush by my bandmates, but I’m not sure that not appreciating the music of Rush was an option either. My first indoctrination? A Farewell To Kings. This was Rush arguably at the height of their powers, not long before they descended into their sometimes unfairly maligned 80s synth-pop phase.”

“An 11-minute prog rock epic featuring bells, a Lydian guitar motif and lyrical references to Kublai Khan – what more can you ask for?”

“In 1998 I bought a copy of [UK power pop crew] Silver Sun’s single Too Much, Too Little, Too Late, which also contained a version of Xanadu. I loved the tune instantly and once I realised it was a cover, it led me to check out the original, which is how I discovered Rush. At the time I only really cared for Xanadu and Closer To The Heart… I was so naïve! It wasn’t until I heard Tom Sawyer on an episode of Futurama that I was encouraged to explore their entire back catalogue. It became apparent quite quickly that AFTK would stand out as one of my go-to Rush albums.”

Favourite song: Closer To The Heart

“Back when my wife and I were dating, I used to make her a lot of mix tapes and she singled that track out as one of her favourites. I’m so lucky to have a wife that really appreciates prog music!”

“The first album I ever heard from Rush was Moving Pictures and it was life-changing. After that, I went to the record store whenever I had money and bought an older Rush album. Eventually I found A Farewell To Kings and for a long time it would never leave my turntable. It’s probably the most overlooked and underrated album in the Rush collection, because it came after 2112 and before Hemispheres, two monster albums. It’s unfortunate, because there are some really great songs and some amazing playing on this record.”

“Although Rush are known for their great arrangements, this song captures me with its simplicity and feeling. That was the beauty of Rush. Their emphasis was great songs, and they knew when to make them simple or difficult.”

“When that album came out, it captured my imagination because it was one of those with lots of sound effects and atmosphere, and that put you in the mood of the stories. Things like Xanadu and Cygnus X-1, those tracks were fantastic. They had a lot of interesting audio scenes that they painted, and with this incredibly complex but melodically catchy and precisely played music. It was played well and the production is fantastic. It’s a great album to listen to on headphones – it really places you in the scenes that Neil Peart was writing.”

“I absolutely love that track. The type of melodies they were experimenting with, that Middle Eastern influence, I wasn’t familiar with that and it really opened my eyes to world music for the first time. Then that becomes a life’s journey. Rush were one of those bands that influenced me the most.”

“I heard A Farewell To Kings and 2112 as a 15-year-old in the mid-80s. These were my first close encounters with conceptual thinking in rock music and with the idea of making an album be more than a collection of individual songs. It blew my mind. Rush were flag‑bearers for oddballs and weirdos everywhere, the perfect rabbit hole for a 15-year-old brainy metal kid to fall into. They showed me I wasn’t alone in liking the things I did. Rush and A Farewell To Kings were my gateway drug into the wonderful world of prog rock, and I’m eternally grateful.”

“Xanadu is probably my favourite Rush song overall, but Cygnus X-1 runs a close second: A 10-minute mind‑movie about a spaceship entering a black hole? ‘To be continued…’? Come on! It just doesn’t get better than that! It didn’t when I was 15, and it still doesn’t.”

“A friend played me an excerpt from 2112 and I thought it sounded really interesting so I went to the record store to look for Rush. I didn’t know what my friend had played me or which album it was from so I just bought the album that had the most interesting cover and that was A Farewell To Kings. I absolutely fell in love with the music on this album. I was hooked. It has a certain magical quality, kind of an old-world feel, from another time. It takes you on a journey, from the medieval/Renaissance feel of A Farewell to Kings to the futuristic Cygnus X-1.”

“Something about the dynamics and build of the guitar just made me fall in love with the song. It’s so intricate and powerful.”

“The first time I heard the songs from …Kings was while listening to the very first Rush album I bought, Exit… Stage Left. That album has fantastic live versions of Closer To The Heart and Xanadu. I’d also started learning to play the drums around that time so they were hugely influential on me. I picked up a copy of A Farewell To Kings not long after that and it’s been one of my all-time favourites ever since. I always think of this record as Rush at their proggiest. It’s still mind-blowing to think that only three guys made all this incredible music.”

You can read the full story of how Rush made A Farewell To Kings in the latest issue of Prog Magazine – on sale now. Buy it directly here or become a TeamRock+ member to read it right now