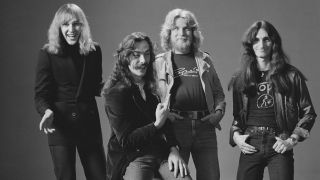 In the latest issue of Prog Magazine, we go back in time with Alex Lifeson and Geddy Lee to remember how they made their seminal A Farewell To Kings album. Here, producer Terry Brown, or Broon as the band would later dub him, tells us the story from his point of view.

Brown worked with Rush, remixing their debut album and then producing all of the band’s subsequent releases through to 1982’s Signals. His résumé also includes production stints with everyone from Voivod to Cutting Crew, Fates Warning and Blurred Vision.

Farewell… was the first studio album after 2112. Did that add any extra pressure on the band and you given its breakthrough success?

“If there was pressure, I wasn’t aware of it. I always had confidence that the boys would write a new batch of killer material – and, of course, they did!”

It was your first residential studio experience as a band/producer, and it took you all the way to Wales!

“The residential thing was excellent – other than the pub, there really wasn’t anything else to do in the village, so we worked all night and slept most of the day.”

The band recorded the title track and some other tracks outside in the quadrangle because of the crisp, ambient sound…

“Yes, the weather was beautiful so we switched it up to daytime recording in the quadrangle for the title track and the intro for Closer To The Heart – Alex wandering around like a travelling minstrel with his acoustic guitar slung over his shoulder.”

It was the first Rush album that really started exploring the Moog and synth sounds (and bass pedals). Do you remember that switch in the way they were doing things, or was it just a natural evolution?

We had dabbled in keys on 2112 with Hugh Syme on the intro, but this was the first time we had different keys to choose from during the whole recording. We were able to colour things in the high end, highlight the fat pedal notes and add leads. It opened up a whole new world for us.

The band work in a more solitary way in the studio now, but back then they were all for one, one for all. What do you remember of those recording sessions and the camaraderie in the studio?

“It didn’t take long before our hours of working were 7pm to 5am and it proved to be very productive – no distractions from staff or the office. The camaraderie was always on point. We started our ‘day’ (night) by convening for dinner at 5pm in the dining room – meals full of banter and great home-cooked food. Great memories.”

Did they have much material coming in?

“As I remember, most of the material was in pretty good shape, but certainly the seeds were there – not least of all lyrically from the Professor [Peart].”

The album ends with the very ambitious Cygnus X-1…

“I remember putting together the complex tape delay loops that gave the space sections the depth and sci-fi quality. It was done using at least eight tracks fed into each other with control of feedback, level, EQ and panning.

Do you think of it as a pivotal album for the band, not least sonically?

Farewell… was another major progression for the boys – really, that never stopped. They were always pushing the envelope of musicianship and playing ability, pulling it off in spades.”

You can read the full story of how Rush made A Farewell To Kings in the latest issue of Prog Magazine – on sale now. Buy it directly here or become a TeamRock+ member to read it right now

The 50 greatest Rush songs ever

The History Of Rush By Geddy Lee & Alex Lifeson: From Rebirth To Retirement