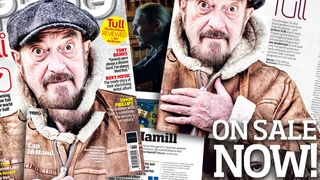 The new issue of Prog is on sale today. In it we celebrate the 50th anniversary of Jethro Tull: Prog speaks to Ian Anderson to discuss the band’s impressive and enduring career, and also to look behind the making of the band’s Heavy Horses album as it turns 40 this year. Anderson also reviews every single studio album of Jethro Tull’s especially for Prog. Plus he allows us to dip into his archives to compile a special and rarely seen Tull scrapbook for your enjoyment.

Tony Banks - with a new classical album just released, the Genesis keyboard legend looks back over an incredible career in The Prog Interview.

The Moody Blues - the legendary prog rockers pay their respects to founder member Ray Thomas, who sadly passed away at the beginning of this year.

Roxy Music - their 1972 debut is being reissued as a super deluxe edition to celebrate its 45th anniversary – we discover the story behind the making of the album.

Claire Hamill - she’s recorded and performed with Fripp and Jon & Vangelis – but is she prog?

Art Zoyd - with a mega box set out to celebrate their career, the French purveyors of avant-garde and members of Rock In Opposition look back over their career.

Sendelica - are this Welsh band prog’s best kept secret? Not any more, we hope…

Plus Aduceus, Beatrix Players, Donna Zed, Soul Enema and more on the CD.

Why not use our store finder to find your nearest stockist?