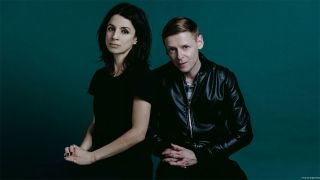 Speaking exclusively about the song to Prog in a track-by-track guide to Pure Reason Revolution’s first album since 2010’s Hammer And Anvil, Courtney said: “A nine-minute rollercoaster and surreal odyssey into doom. Pink Floyd tussling with Bring Me The Horizon?

“I went mental on the drum programming and session drummer, Geoff Dugmore absolutely smashed it. He did a great job replicating and going beyond what I’d programmed. On some of the rolls he said, ‘This isn’t possible to do, drummers can’t do this!’ However, with cheeky overdubs it was possible. He did a remarkable job and added his incredible groove.”

Courtney added: “We did Chloe’s vocals for this during a blisteringly hot Berlin summer. Each night she’d cluster all the fans we had in the studio and take them to the rather primitive hotel down the road. The vortex of gusts from all the fans almost levitated her off the bed!”

Pure Reason Revolution will head out on the road later this year on a co-headline tour with Gazpacho.