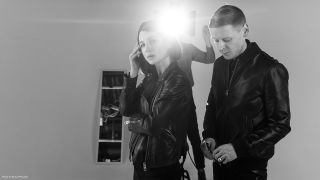 Pure Reason Revolution have announced that they’ll release their first album in 10 years this spring.

Jon Courtney and Chloë Alper reactivated the band in 2019 after parting ways in 2011 following the release of 2010’s Hammer And Anvil.

They played their first show since returning at last year's Midsummer Prog in the Netherlands, where they performed their 2006 debut The Dark Third in full

Now they’ve revealed that their fourth album Eupnea will arrive on April 3 through InsideOut Music.

The duo say in a statement: “We stuck to our manifesto of no musical boundaries and the result was Eupnea.

“We return to a more progressive sound with ferocious guitars, thunderous drums and the stacked harmonies that give us our signature sound. We're excited to begin playing it live.”

The cover art was created by artist Jill Doherty and the album will be released on limited edition CD Digipak, gatefold 2LP/CD and on digital and streaming platforms.

A full tracklist and pre-order details will be revealed in due course.

Pure Reason Revolution have two shows this summer: at Night Of The Prog in Germany on July 17, and at the UK’s Ramblin’ Man Fair on July 18.