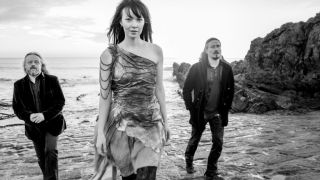 "A new Auri album is in the pipeline and the idea is to get it recorded and released some time during 2021," he says. "We already have about seven or eight songs done so it's only a matter of finding the time and the place to record those songs, but it's sounding excellent so far!"

The trio came up with the idea for Auri back in 2011 as a means for combining their passion for folk, celtic music and soundtracks .