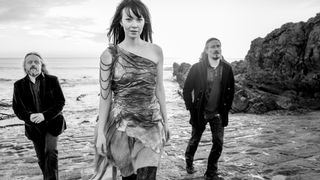 The band have just released their first single, Night 13, and have a sound which Holopainen tried to describe to Prog. “Just a few days ago, we had this conversation within the band and we thought about the best way to describe it. Two terms came to our minds; Rabbit Hole Music and Celestial Metal. Obviously you can hear influences from folk music, Celtic music, soundtracks - all that music that we love and adore, but categorising the style is really impossible. I’ll leave that to the listeners.”

Night 13 is taken from the band’s self-titled debut album,which will be released through Nuclear Blast on March 23. The album was recorded at Peter Gabriel’s Real World studios with Sound Engineer Tim Oliver. The full tarck listing is: The Space Between, I Hope Your World Is Kind, Skeleton Tree, Desert Flower, Night 13, See, The Name Of The Wind, Aphrodite Rising, Savant, Underthing Solstice, Them Thar Chanterelles.

Auri can be ordered here.